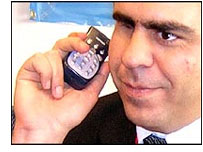 According to Geoff Adams-Spink BBC News Online disability affairs reporter — “The first mobile phone designed specifically for blind and partially sighted people has gone on show in the UK.

The phone is made by a Spanish company, Owasys – pronounced oasis – who hope to have their 22C handset on the UK market in three months’ time.

It goes on sale in Spain next week.

The phone is on display at the Royal National Institute of the Blind’s Techshare exhibition in Birmingham.

It has no visual display at all but uses a speech synthesiser to read everything that would normally appear on the screen.

As well as giving audio feedback from button presses, the 22C can send and receive text messages and will speak the name or number of incoming callers.”