Delta Air Lines will be launching a new in-flight service on 36 Boeing 757 aircrafts. Live Satellite TV and Audio Pay-Per-View Movies and MP3 Programming will be coming to an airplane headrest near you. 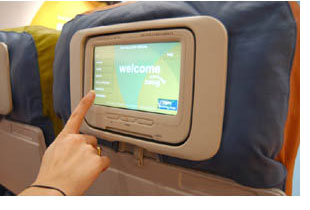 Song began in-flight testing of the new MAS eFX system on one aircraft at the end of October. Over the next several months, Song will phase its new entertainment technology into its fleet of 36 Boeing 757 aircraft at the rate of one every four to seven days. By early 2004, all Song aircraft are expected to be outfitted with personal video monitors at each seat, offering a complement of entertainment features including:

“This revolutionary technology will redefine the air travel experience for our customers,” said Tim Mapes, Director of Marketing for Song. “We are committed to creating a unique travel environment and believe our customers will truly enjoy the wide range of choices this technology provides.”

Beginning in the second quarter of 2004, Song will add server technology to its aircraft, providing even more sophisticated technology and a broader array of amenities, including:

– downloadable, pay-per-view movie programming available on demand, featuring a wide-range of current offerings for all ages;

“Matsushita is proud to be premiering our eFX system on board Song,” said Paul Margis, Chief Technical Officer at MAS. “With its innovative features and technologies, passengers will be able to choose how they spend their time on-board the airplane, much the way they choose their entertainment at home.”

“Fliers don’t have to miss their favorite shows when they travel now,” said Mark Jackson, senior vice president, EchoStar. “Song passengers will now be able to watch the same shows from ESPN, CNN, Discovery or Animal Planet in the air that they watch at home, giving them a more satisfying in-flight entertainment experience.”

Consumers can experience Song’s in-flight entertainment technology “on the ground” at Song’s first-of-its-kind concept store in New York City, which will be open through December 21. The “Song in the City” store, located at 98 Prince Street in the heart of Manhattan’s Soho district, features actual Song all-leather aircraft seats that are equipped with the In-Flight Entertainment system.