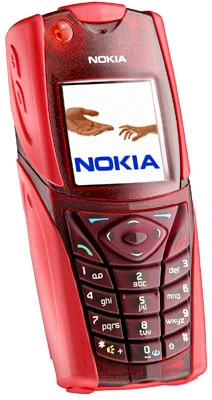 Nokia has just introduced the World’s first GSM walkie talkie phone, allowing users to speak immediately at the push of a button. The phone’s main feature “push to talk,” allows users to instantly speak to one or more people. The phone will be available in a GSM 900/1800/1900 MHz version primarily for the Europe/Asia market.

NEW YORK — Nokia today unveiled the world’s first GSM push-to-talk handset, the sports-inspired Nokia 5140 phone. Along with its ability to quickly connect users at the push of a button, the Nokia 5140 phone also includes a number of unique features designed for the active-minded consumer such as a digital compass, Fitness Coach application and a built-in VGA camera. The GSM/GPRS/EDGE Nokia 5140 phone will be available in a GSM 900/1800/1900 MHz version primarily for the Europe/Asia market and in a GSM 850/1900/1800 MHz version primarily for the Americas market. Both versions are expected to be available during the 2nd quarter of 2004.

With just the push of a button, Nokia 5140 phone owners can connect to friends and family by using the push-to-talk feature for quick voice communications, or to access the built in VGA camera to communicate visually. The push-to-talk feature can be used to quickly connect the user to one person, or to a group of people, simply by using the convenient side-mounted key.

“Nokia continues to innovate new products that have a strong appeal to well-defined markets. The Nokia 5140 phone, with its complement of active features is a perfect fit for athletic and outdoors enthusiasts – as well as for those who aspire to that lifestyle,” said Paul Chellgren, senior vice president of product management and business development for Nokia. “The Nokia 5140 phone is innovative not only because of its range of active features, but it also marks the introduction of the world’s first GSM push-to-talk handset. By introducing push-to-talk to GSM, Nokia is bringing a whole new way to communicate to the world’s leading wireless technology.”

The Nokia 5140 phone features a durable dust, bump and splash-resistant housing that allows it to keep up with demanding users, but its active nature is more than just skin deep. To keep users oriented on the trail, an integrated digital compass displays the direction both graphically and numerically. After dark, a built-in flashlight helps to guide the way. For the fitness enthusiast, a new Fitness Coach feature uses training regimens based on professionally recommended training principles.

Additional functionality of interest to the fitness minded is an interval timer and stopwatch for keeping track of workout routines and an integrated FM radio to help make that time go by even faster. An optional Active Headset enhancement is available to provide easier wearability while on the move, and for increased resistance to bumps and splashes. The Active Headset features one button to answer and end calls and another that can be used to activate the push-to-talk capability of the Nokia 5140 phone.

Along with its unique lifestyle features, the Nokia 5140 phone also has a generous complement of the latest mobile features. Multimedia messaging capability allows for the sending and receiving of images, sounds and text. The Nokia 5140 phone also supports downloadable polyphonic ring tones, custom wallpapers and Java(TM) applications to customize the handset. For additional personalization, optional Xpress-on(TM) shells are available in three fashionable color combination schemes.