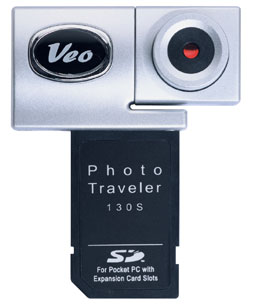 “With the release of our previous Photo Traveler products we had a ground swell of supporters who loved the products but wanted some upgrades to make the device more conducive to their business markets,” said Tim Martin, Veo vice president. “The Photo Traveler 130S answers all of those requests, and then some.”

The Photo Traveler 130S, priced at $99.99, will be available at major retailers in mid-November. The camera features an adjustable lens providing users with the flexibility of focusing on close or far away objects with crisp definition. Like the previous Compact Flash version of the Photo Traveler, the 130S can easily capture video clips, but takes the feature a step further by adding advanced audio/ video synchronization into the ASIC. The new 130S lens design now moves in a vertical orientation and features a “+10 design” to add additional degrees of freedom to the 180 degree swivel lens, making it more natural for users during self portrait and downward shots.

The new handheld camera, which works with a variety of devices such as the Dell Axim X3, Toshiba E400 & E800 among other major Pocket PC devices, will now operate on the latest Pocket PC 2002 and Pocket PC 2003 operating systems. All Photo Travelers are designed with an easy-to-use interface that lets users instantly capture, view, store and organize digital images in full.