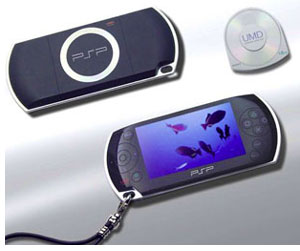 Sony Electronics has recently detailed plans to release an all-in-one handheld gaming device that includes a digital music and video player and could even act as mobile telephone.

The $60 device is set to rival Apples iPod device. A prototype will be available by the end of 2004 and will look similar to Nokia’s N-Gage.

The “concept model” shown by Kutaragi, Sony’s executive deputy president and head of its gaming business, was a one-piece device designed to be grasped in two hands, with a bright, color screen roughly 4.5 inches (11.4 cm) in diameter.

Japan’s Sony Corp. on Tuesday detailed plans for a much-anticipated all-in-one handheld gaming device that includes a digital music and video player and could even act as mobile telephone.

Officials of the world’s largest consumer electronics maker also said Sony would launch a rival to Apple Computer Inc’s iPod digital music player next year for as little as $60.

Sony described a prototype for its PSP gaming device — due out before the end of 2004 — during a presentation to U.S. investors that reiterated plans to restore profitability at the company.

“PSP will be the Walkman of the future,” declared Ken Kutaragi, Sony’s executive deputy president and head of its gaming business, comparing a PSP prototype to Sony’s highly successful earlier generation of music players.

Sony currently envisions a device that looks somewhat similar to Nokia’s recently introduced N-Gage gaming phone, but with a bigger display that makes it looks more like a handheld television.

The “concept model” showed off by Kutaragi was a one-piece device designed to be grasped in two hands, with a bright, color screen roughly 4.5 inches (11.4 cm) in diameter, he told Reuters.

“PSP will not be one kind of product,” Kutaragi said. Rather, it is a platform of related devices with the capacity to add or subtract features, he said, while stressing that final design details are not expected to be revealed until later.

While crediting Apple and its chief executive, Steve Jobs, for the success of the iPod, Sony officials said the PSP would allow consumers to watch music videos as well as listen to digital tunes.

“We are taking on iPod with our new device,” another Sony official said. “We are coming at him (Steve Jobs) on that front.”

Sony executives said that next year it will introduce versions of a rival music player to the iPod for as little as $60, a price only one-quarter or less than the $200 to $400 Apple charges for various versions of its sleek product.

Apple’s lead in innovating in the portable music sector practically invented by Sony has been highlighted as typical of the problems at the Japanese company, which last month reported a 25 percent drop in quarterly profits.