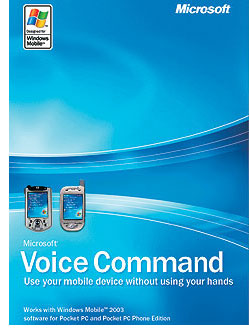 Both versions of Microsoft Voice Command for PDA and mobile phone will sell for $40.

Voice Command turns up the volume on today’s speech-recognition technology, revolutionizing the way consumers interact with their Pocket PC. Whether users are phoning a friend from behind the wheel, checking appointments while running errands or listening to music on the treadmill, Voice Command makes it easier, simpler and more convenient than ever for them to take their connected lifestyle with them wherever they go.

“Microsoft’s Voice Command sets a new standard in voice-controlled applications for mobile devices,” said Dale Coffing, editor in chief of PocketPCPassion.com. “The out-of-the-box experience for making phone calls, hearing the details of upcoming appointments and listening to music is superb. Being able to use my Pocket PC so easily while driving my car or just walking down the street is phenomenal.”

Voice Command uses Microsoft’s next-generation phonetic speech-recognition technology, the result of 10 years of research, to make speech interaction simple, intuitive and practical. While most voice-controlled software applications today require people to deliver unnatural and prerecorded verbal commands, Voice Command allows them to use natural language to go directly to what’s most important in a matter of seconds. The following key features are provided in Voice Command:

Voice-controlled hands-free phone. Whether in the car, at the airport or walking down the street, people will enjoy true hands-free phone conversations without ever having to manually dial a number. They can simply say any name from their contact list. For example, they might say “Call Bob Smith,” or they could give a number, saying for example, “Dial 555-1212.”

Voice-controlled calendar lookup. Checking appointments has never been easier. Regardless of location, consumers can simply ask their Pocket PC, “What’s my next appointment?” or “What’s my calendar?” and the time, subject and location of each entry will be read aloud.

Voice-controlled Windows Media Player. Now voice commands can be used as a virtual remote control to select and play music by album, artist or genre so people won’t be fumbling for CDs or scrolling through a long list of songs. Consumers can also simply say, “Play music,” using Voice Command as their personal disc jockey.

“Voice Command provides a significant improvement in speech software that is dramatically changing the way people will forever use their mobile devices,” said Pieter Knook, corporate vice president for Mobile and Embedded Devices and Network Service Providers at Microsoft. “The product is a great example of how we’re driving synergies between our platforms and devices business to create more powerful mobile experiences for our customers.”

Automotive Business Unit Turns Up the Volume on Voice-Controlled Software

Microsoft’s Automotive Business Unit developed Voice Command to address consumers’ need to be safely connected while on the go. People want access to their personalized information, regardless of location, and research supports this trend. A recent survey revealed that 85 percent of U.S. cell phone owners and 50 percent of PDA owners use their devices while in the car.*

“We’ve been focused on providing improved communication, entertainment and information to drivers and passengers for the past decade,” said Dick Brass, corporate vice president of Automotive Technologies at Microsoft. “No other company has the expertise and technical tools to provide a simple solution like Voice Command to the thousands who need safer, more convenient access to their personalized information both inside and outside the car.”

Available for $39.95 (U.S.) on Handango.com and PocketPC.com, Voice Command is not only an affordable way to enhance a Pocket PC but is simple to install for consumers whose systems meet the following minimum requirements: