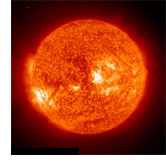 A Solar flare has been detected by the National Oceanic and Atmospheric Administration (NOAA). The size of the eruption is about 10 times larger than the Earth and may result in disruption of wireless networks, GPS, and other Satellite based communications. The eruption created a geomagnetic storm that the NOAA is forecasting as G3, or “strong,” on its five-level rating system.

Oct. 22, 2003 — Forecasters at the NOAA Space Environment Center in Boulder, Colo., observed two dynamic areas of the sun, one of which has produced a coronal mass ejection, or CME, Wednesday morning at 3 a.m. EDT that appears to be Earth-directed. The forecasters are predicting a strong geomagnetic storm, G-3 on the NOAA Space Weather Scales, that should reach Earth on Friday, October 24. 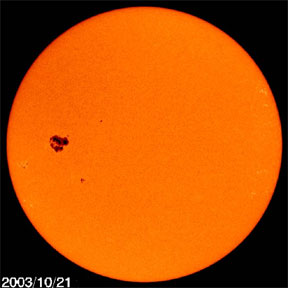 NOAA Region 484 developed rapidly over the past three days and is now one of the largest sunspot clusters to emerge during Solar Cycle 23. It is about 10 times larger than the Earth. This region, which is nearing the center of the sun, already produced a major flare, R-3 on the NOAA Space Weather Scales, producing a radio blackout on October 19 at 12:50 p.m EDT. The region continues to grow, and additional substantial flare activity is likely.

Larry Combs, a forecaster with the NOAA Space Environment Center’s Space Weather Operations, said that this region has developed rapidly over the last three to four days. “It’s somewhat unusual to have this much activity when we’re approximately three-and-a-half years past solar maximum,” he said. “In fact, just last week, solar activity was very low with an almost spotless sun.” Solar cycles of high and low activity repeat about every eleven years, and the sun has been moving towards solar minimum for the past three years.

A second intense active region is rotating on the southeast quadrant of the sun. Although the sunspot group is not yet visible, two powerful eruptions occurred on October 21 as seen from the LASCO instrument on the SOHO spacecraft. These eruptions may herald the arrival of another volatile active center with the potential to impact various Earth systems.

Further major eruptions are possible from these active regions as they rotate across the face of the sun over the next two weeks. Satellite and other spacecraft operations, power systems, high frequency communications, and navigation systems may experience disruptions over this two-week period.

NOAA is dedicated to enhancing economic security and national safety through the prediction and research of weather and climate-related events and providing environmental stewardship of the nation’s coastal and marine resources. NOAA is part of the U.S. Department of Commerce.