Toshiba has just released two new Pocket PC models, the e400 and e800 series also known as the e405 and e805 PDAs. Both units enable Voice over IP capabilities, built in Wi-Fi, and added support for the new Picture View Presentation Pack. Picture View allows you to output presentations with the built-in RGB port, making it a suitable device for the corporate end user.

The ATI 2MB Imageon 3220 graphics controller has been used, with improved video performance in presentations and Windows Mobile 2003. Both units are available immediately, with the e400 series priced at $299 USD, while the slightly advanced e800 series is to be priced at $599 USD. 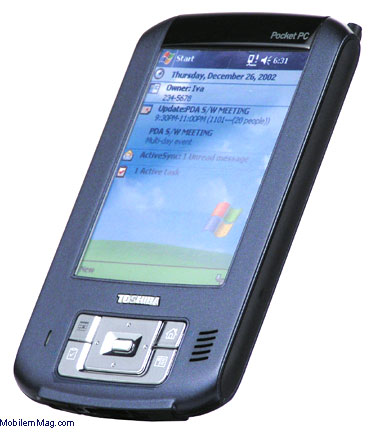 Toshiba’s PDAs build upon the company’s core focus on mobility and wireless connectivity providing users increased flexibility and convenience to help manage their busy lives. With the built-in Toshiba VoIP (1),(2) phone software (e800/805 Series only), users can place phone calls over a high-speed wireless LAN network worldwide, reducing the cost of making long distance and international calls via traditional phone systems. A subscription to an Internet service provider and VoIP broadband telephony service (3) is needed for users to take advantage of the VoIP functionality. The Pocket PC e800/805 Series also features integrated Wi-Fi (802.11b) connectivity (1) for convenient Internet access at a Toshiba SurfHere(TM) public wireless hotspot or any other public hotspot, or to a user’s corporate wireless network.

The Pocket PC e400/405 and e800/805 Series include software designed to quickly and efficiently access a user’s appointments, contact information or time and date with the sound of the user’s voice. Voice commands such as “Contacts” and “Calendar” instantly open the applications without having to use the stylus. Customers can also take advantage of the text-to-speech application, which delivers audio feedback of e-mail messages, schedule and other text documents, personalizing the PDA experience. For the ultimate road warrior, a built-in world clock is included for easy access to local time zones.

“Toshiba understands that customers desire a personal lightweight data access device that not only keeps them connected to the corporate network, but also delivers on new technology that increases productivity and ease of use away from the office,” said Carl Pinto, director of product marketing, Toshiba DPD. “The Pocket PC e400/405 and e800/805 represent the true definition of a handheld data device — convenience, interaction and portability.”

Creating a lightweight mobile presentation device, the Pocket PC e800/805 Series features the optional Toshiba Presentation Pack that allows users to conduct a presentation directly from the PDA. Priced at $99 (5), the Picture View Presentation Pack includes an RGB port to connect to a monitor or projector and a USB port for devices such as a full-size keyboard or numeric keypad.

The Pocket PC e405 and e805 are available through Toshiba’s retail distribution channels including computer superstores and consumer electronic stores. The Pocket PC e405 has an estimated single user price (ESUP)(5) of $299 and the Pocket PC e805 ESUP is $599.

(1) Pocket PC e800/805 Series only. Subscription of an Internet service provider is necessary for Internet connection.

(2) Pocket PC e800/805 Series includes VoIP software from VLI(R) Inc. Toshiba does not guarantee the interoperability with other Gphone vendors or any other VoIP software.

(3) A subscription to VLI Inc. VoIP phone service is needed to conduct VoIP calls to a phone system.

(4) Pocket PC e800/805 Series only. Only the ClearVue application supports this mode.