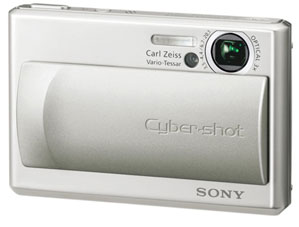 SAN DIEGO — Adding one more case to the “How’d They Do That?” file, the miniaturization wizards at Sony (known formally as product designers and engineers) took features found on more full-figured digital cameras and squeezed them into a slim, pocket-friendly design no larger than a deck of cards.

Slide the front lens cover down and in just over one second, the Cyber-shot® DSC-T1 digital camera’s large 2.5-inch LCD viewfinder comes to life. It occupies roughly two-thirds of the camera’s back-surface area, giving more room to see and show off images at the moment they are captured.

Press the shutter release button and the camera demonstrates why it is perhaps the fastest five megapixel camera. Due in large part to Sony’s Real Imaging Processor™ circuit, it shoots full-resolution images in one second intervals, and can capture four high-speed burst shots in less than two seconds.

But the camera offers more than great still pictures. With optional Memory Stick PRO Duo™ cards, the T1 camera captures and plays back high resolution moving images in MPEG-VX Fine mode—good enough to make onlookers believe that it was captured with a digital camcorder. “True to Sony’s DNA, we created a digital camera that balances the cutting-edge performance with eye-catching design,” said Steve Haber, senior vice president of Sony Electronics’ Personal, Mobile and Imaging Products Division. “If the best camera is the one that you have with you at all times, then this is that camera.”

So, How Did They Do That?

The slim metallic design of the Cyber-shot T1 digital camera is attributed to a new Carl Zeiss® Vario-Tessar® optical lens that operates within the camera rather than extending out. In spite of its compact design, the camera still features a five megapixel CCD image sensor and a 3X optical zoom to ensure great image quality.

Other miniaturization efforts include the development of a new rechargeable Infolithium® battery system that is roughly the size of a matchbox and a tiny Memory Stick PRO Duo removable media slot.

The USB port, A/V Out and DC jacks have also been relocated to the new camera docking station (bundled accessory) for charging the battery pack or connecting the camera to a TV or computer.

The result is a camera that measures about 0.8 inches thin and 2.4 inches tall.

Taking the Guess Work Out of Lighting Conditions

The Cyber-shot T1 camera is packed with sophisticated auto-focus and auto-exposure options to help get the picture right the first time.

Users can also select from eight different shooting modes in accordance with the shooting conditions. The camera automatically makes the optimum settings to match the scene, making it easy to shoot high quality images even under difficult lighting conditions.

In the Magnifying Glass scene mode, subjects that appear on the LCD screen are magnified up to 3.3 times, which allow users to see details that would otherwise be difficult to confirm with the naked eye.

The Cyber-shot T1 camera will be available in January for about $550.