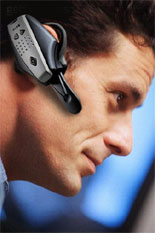 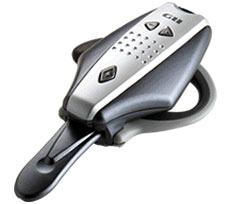 The GII mobile headset from Bluetake Technology is much the same as other bluetooth headsets on the market. It features a simple interface with only three buttons: a power button and two volume controls. The main bulk of the GII’s body comes from the speaker. There is also a mic and a dual-purpose ear attachment/signal transmitter that extends from the larger base.

Voice quality was decent through repeated testing. The mic can be a little touchy though, as you must be extremely close to the device to be heard sufficiently on the other end. In fact, when wore on the ear where it supposed to be placed, I found myself yelling just so the mic would pick me up. The functionality of this Bluetooth device looses it’s effectiveness when I lose my voice trying to use it.

The aesthetics of the GII are rather striking. The device looks exceptionally large and out of place on someone’s head. Not only this, but it can appear rather outlandish. This might be okay if you are Spock from Star Trek, but most folks want a device that blends unnoticeably with their attire.

It features a direct input for the AC adapter to charge the unit. Assigning the device to the Bluetooth I/O port on a cell phone can be unnecessarily difficult. This is spurred by the fact that there is only three buttons, so they end up taking over multiple duties. All in all, the GII gets the job done. However, at what price?