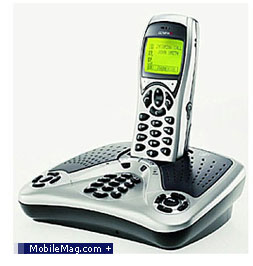 The CDP lets consumers chat on the phone using a Bluetooth headset while wirelessly surfing the Internet or accessing email on a laptop anywhere in the home — all from a single cordless data phone. The Bluetooth v1.1 standard allows devices to connect wirelessly from an average distance of 30 feet. To boost the range, the Olympia CDP uses Class 1, a high-powered Bluetooth, to let users maintain a connection from a range of up to 800 feet with a clear line of sight or up to 150 feet in a home.

“The CDP lets consumers embrace wireless home networking without having to spend hundreds of dollars on complicated equipment. For the same price as a standard two-line phone, consumers can connect PCs, laptops and PDAs to the CDP to gain wireless Internet access throughout the home,” said Bruce Garfield, chief executive officer, Wave Industries Ltd. “The CDP is an extension of our family of wireless telecommunications products and delivers on our quest to un-tether consumers from cables and phone lines.”

Users can expand the phone system with up to seven additional handsets — all from a single phone line. Consumers without broadband access can gain wireless connectivity via the 56K v.90 data modem built into the CDP base, rather than needing access to a phone jack.

The Olympia CDP-24201 Phone System
The CDP-24201 is an expandable phone system, loaded with top-of-the-line calling features users can access from multiple areas of their home or small home office. The feature-packed base station is a two-line phone complete with an integrated 56K v.90 data modem, a speakerphone, and the ability to interact with up to six additional handsets. The phone uses a 2.4 GHz digital spread spectrum to let consumers add additional handsets to the system without the need for a separate phone line or phone jacks for each handset. Consumers can also store up to 100 of their most important numbers in the phone base station for one-touch dialing — even from the handset.

Handsets feature a deluxe, graphical LCD screen and icon-driven menu for easy navigation, as well as a speakerphone and a headset jack. Handsets can be personalized for each individual user with programmable ring tones, the ability to select the navigation language displayed — English, German, French or Spanish, personal phone books with storage for 40 additional numbers in each handset and storage for 20 numbers in the missed call and redial memory.

The CDP also includes the Olympia Dataphone Manager software, which provides a convenient way to organize phonebooks and configuration settings on the handsets and base station. It also lets users synchronize contacts stored in applications such as Microsoft Outlook with their CDP phone. New features such as languages and ring tones will be available for download from the Web site as they become available.

The Olympia CDP is the newest product in a growing family of telecommunications products that already includes three 2.4 GHz multi-handset, cordless phone systems for the home. Models include:

— Olympia Cordless Phone — OL2420: a handset used to expand the Olympia cordless phone system, priced at $39.95. Add up to three additional OL2420 units to OL2400 base unit with only a single phone jack. The additional handsets can also be used to conference or intercom with others on the system.

Wave also recently began shipping the Olympia OL6010 Wireless Conference Phone, a $799 wireless conference phone system that transforms any space within 150 feet of the phone’s base station into a first rate conference room without the tangle of wires common with standard conference phones.

Pricing, Availability & System Requirements
The Olympia CDP-24201 is priced at $199.95 for the base station and handset, and $79.95 for each additional handset (OL24200). The Olympia OL24903 Bluetooth USB Wireless Adapter is $79.95. The CDP and Wireless Adapter are available as a bundled package for $249.95 (OL24206). The phone base station comes with an AC adapter, USB cable and a 700mAh NiMH battery pack. The phones and accessories are available nationwide at Staples and Fry’s Electronics, at regional retail outlets, and via the Hello Direct and Lifestyle Fascination catalogs and the Internet. For sales information, call (866) 537-0384 toll free or via the Web at www.olympiaphones.com.