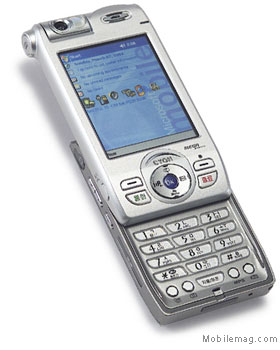 Seoul, Korea, — LG Electronics (LGE) has developed a state-of-the -art smart phone with a 1.1 million pixel (mega pixel) built-in camera and the latest CPU and OS for PDA, and is preparing its full launch in the market.

LGE Vice Chairman and CEO S.S.Kim finished the development of its Slide Down Type leading-edge smart phone (LG-SC8000, LG-KC8000) and unveiled it to European consumers at the xITU Telecom World 2003x in Geneva. The latest smart phone is equipped with a 1.1 million mega pixel built-in camera, Intel 400Mhz Xscale processor for PDA, 192MB memory, and xPocket PC 2003 Korean versionx of Microsoft as its O/S.

The single most important characteristic of the smart phone is that it represents the development of a smart phone, combining a mobile handset with PDA-styled User Interface. It has the worldxs first CCD-type mega pixel built-in camera, with one-hour video function, and semi-automatic sliding type key pad, which reduces its size.

The smart phone, whose design is different from the conventional PDA, looks like a Slide Down Type mobile handset. It also has an additional 128MB memory exclusively for multimedia, creating 196MB memory in total.

LGE also expects that the 300,000 pixel CMOS camera phone, which is used widely these days, will become a ‘Toy camera phone’, when it introduces its CCD type 1.1 million pixel camera phone. The CCD Type provides higher definition and quality than the CMOS type.

The product has a slot for a portable memory card, so that memory expansion is also possible, and it has IrDA and USB ports which facilitate communication with other information devices.

A variety of multimedia functions are delivered on the 2.8 inch 262,000 color TFT LCD, including video, photo editing and mailing, MMS, GPS, video and MP3 file downloading through PC, and playing. The phone is to be launched initially in Korea around the end of the year.

LGE said it will introduce the latest product at the ‘ITU Telecom World 2003’ from October 12 through 18 to the press and industry stake holders.

Mr. James Kim, President & CEO of LG Electronics Information and Technology, said, “The Slide Down Type smart phone is the most advanced intelligent multifunctional device, and it definitely signals the beginning of the upcoming Ubiquitous Age.”

LGE is employing the multifunctional/multimedia smart phone as a strategic product to symbolize the companyxs advanced technology in the PDA phone market both in Europe and worldwide.