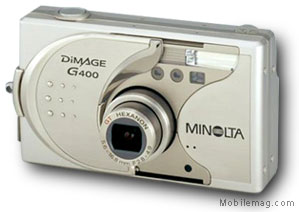 “It’s appropriate that this fashionable and easy-to-use DiMAGE G400 digital camera is the first to be introduced by our newly formed company,” said Jon Sienkiewicz, vice president of marketing, Konica Minolta’s Camera Division. “The new fully-featured DiMAGE G400 is the perfect companion for any photo enthusiast.”

The DiMAGE G400 features a 4.2 megapixel CCD for sharp, clear pictures as well as a 3x GT Hexanon optical zoom lens incorporating seven elements in six groups to provide sharp, high-contrast images. The lens is designed to minimize flare and unwanted aberrations so that the tonal range and detail in the scene are apparent in the final image.

A newly designed signal-processing engine makes this compact camera twice as fast as the DiMAGE G500. In fact, the Konica Minolta DiMAGE G400’s rapid startup (0.7 seconds) and fully-automatic picture taking and shut down cycles in only 1.5 seconds. This allows users to take a properly exposed and in focus picture in the blink of an eye.

The DiMAGE G400 provides equally impressive performance during playback. Playback mode starts up in approximately 0.2 second. A still image can be seamlessly enlarged from 1x to 12x in 1.5 seconds. Following the tried and true design of traditional film cameras the new DiMAGE G400 is easily slipped into a pocket or bag and taken anywhere.

Despite its small size, the DiMAGE G400 is packed with features. The Super Continuous mode takes a series of three images at a rate of 2.5 frames per second. Six scene-select modes allow a user to quickly optimize camera operation for specific subjects. Auto bracketing makes a three-frame exposure or focus bracket of a scene to ensure the best results. Exposures can also be set manually if desired. The camera can store and recall two sets of frequently used camera settings.

Advanced amateur photographers will also appreciate the DiMAGE G400’s creative image-making features. Color, sharpness, and contrast can be controlled to create the desired image. And the camera’s color-balance function allows users to change the relative proportions of the red, green, and blue to shift the overall color of an image.

Dark noise, an ever-present problem in electronic systems, presents itself as a grainy or sandy appearance to digital images taken with long exposures. The new DiMAGE G400 combats this problem with a noise-reduction function, which automatically activates for exposures of 1/2 second or longer.

The camera’s built-in lens cover not only protects the optical zoom lens, but also turns the camera on and off in one smooth movement. Buttons and controls are ergonomically placed to facilitate operation. And the familiar click of a film-camera shutter sound confirms that an image has been captured.

The DiMAGE G400 can focus as close as 2 inches allowing close-up photographs to be taken of small objects. And, at its maximum magnification, an area of 3.1 x 2.4 inches is covered.

The DiMAGE G400 has a convenient dual card-slot system for flexible image storage. Both Memory Sticks and Secure Digital (SD) Memory Cards can be used alone or in combination. When both memory card types are used with the camera at the same time, up 640MB of data can be saved depending on the capacity of the cards. This eliminates the worries of running out of memory during important photographic events.

The DiMAGE G400 is not restricted to only taking still photographs. 320 x 240 XR (Extended Recording) movies with audio can also be made. The length of the movie clip is only limited by the storage capacity of the memory cards in use. Likewise, audio can be recorded by itself or attached to a recorded still image.

Still images can easily be shared electronically. Favorite images can be conveniently resized to 640 x 480 or 320 x 240 in the camera. Simply connect the camera to a computer with the supplied USB cable to transfer the data so that it can be attached to an e-mail or posted on the Web.

The DiMAGE G400 is supplied with a high-performance, rechargeable lithium-ion battery. The DiMAGE G400 is Exif Print compatible. Menus can be displayed in seven languages: Japanese, English, French, German, Spanish, Italian, and Chinese.