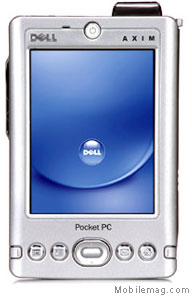 ROUND ROCK, Texas — Dell today expanded its handheld product offerings by introducing the three-member Axim X3 family, slim and compact PDAs that include the Axim X3i, a $379 model with integrated wireless capability.

At 5 ounces, the Axim X3 is 28 percent lighter than its predecessor, and at .55 inches, 17 percent thinner. The Axim X3 delivers bright color displays, removable primary batteries, SD I/O, consumer infrared and optional built-in wireless networking. It is available in three configurations: the Axim X3i with integrated Wi-Fi 802.11b for $379, and two non-wireless Axim X3 configurations for $229 and $329.

Dell will continue to offer the award-winning Axim X5, which has elevated Dell to the No. 2 Pocket PC handheld device supplier both worldwide and in the U.S. in less than a year.

“Dell established the gold standard of price-performance and customer value leadership in the handheld segment throughout the past year,” said John Medica, senior vice president and general manager, Dell Product Group. “With the Axim X3i, Dell once again is leading, bringing integrated Wi-Fi functionality at excellent price points on the Pocket PC platform.”

Both the $379 and $329 configurations are powered by the Intel Xscale processor at 400MHz, and offer 64MB of SDRAM and 64MB of Intel(R) StrataFlash ROM. The built-in Secure Digital IO slot can host a number of devices. A 3.5-inch transflective TFT color display is standard on all Axim X3 configurations, with 240×320 (QVGA) resolution. The unit’s sync/recharge cradle — standard on $329 and $379 configurations — has an extra battery charge slot that accommodates either a spare standard battery (950 mAh) or the available high-capacity (1800 mAh) battery ($99).

Users also can opt for the Axim X3’s $229 configuration, which has an Intel Xscale 300MHz processor, 32MB of SDRAM, 32MB of Flash ROM and a USB sync cable instead of a cradle, in addition to all the other features of the $329 unit. All Axim X3 units will be offered with a wide variety of accessories, such as folding keyboards and leather carrying case.

Technical Features of the Axim include: