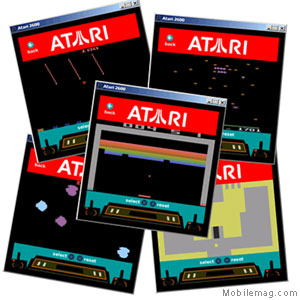 MobileWizardry and Mobile Digital Media (MDM) have announced the official Atari 2600 emulator that will be available this Christmas, named “Atari Retro”.

The software collection to be released are Adventure, Asteroids, Breakout, Centipede, Missile Command, Pong, Yars Revenge, and other classics.

The product is officially branded and licensed in collaboration with Atari. It contains a complete Atari 2600 emulation engine using original cartridge ROM images to give that classic original in front of the television while with game console quality.

The official release is set for the Christmas season on MMC cards and will be bundled with a number of selected Atari 2600 game images. Pricing has yet to be determined.