Back in February, we received the B&W Hiptop from Danger with very limited availability in Canada. Recently they have released a new colour version, and have made a deal with Microcell/Fido to bring the device to Canadians. The device currently available in the US from T-Mobile re-branded as the “Sidekick Phone”. Running on GSM 900/1900Mhz the Hiptop will not work in Europe, we hope to see a tri-band version in the near future.

Right out of the box, the 240×160 TFT Transreflective (Indoor & Outdoor visible) screen is impressive. Aside from that, the 180 Gram, 116 x 65 x 29 mm (6.2 ounce, 4.5 by 2.6 by 1.1 inch) unit is virtually identical to the original B&W Hiptop. With the same super cool orientation sensitive swivel screen, lit keyboard and scroll button. Memory wise, the unit has 32MB of RAM, double that of the original. This gives you room for 2000 contacts and 20 notes. Unfortunately, there’s still no external memory option. The specs say it should run 60 hours on standby and about 3 1/2 hours of talk time. As the connectivity addicted consumer I am, I found that heavy surfing had the battery running low after 48 hours, not quite up to spec.

The unit takes about 10 seconds to boot up. After that you have access to many options in the system, here is a breakdown of those:

Web Browser: Just as easy to use as the original, plug in any webpage and you’re surfing. No Java support but the speed of the “always on” GPRS connection makes surfing comparable to home dialup. Pages you visit are rendered cleanly and allow you to scroll through the text while the graphics are loading. Bookmarking and link e-mailing work pretty much the same as on a desktop. Should you get a call while on line, the net connection is favoured over the voice call.

AOL Instant Messenger: Much like the desktop version, you are limited to 10 simultaneous chats. MSN, Yahoo and other IM services are presently not available.

E-mail: As a solid, dependable mobile e-mail client, messages roll in continuously via GPRS. Those with Blackberry envy needn’t worry. This unit is intended for the consumer instead of enterprise user since corporate mail is not supported. The unit comes with it’s own Fido e-mail address and the ability to add 3 POP addresses. As with the original, you can still view Word, Excel or picture attachments.

Phone: The dual band GSM 900/1900 MHz device supports voice, polyphonic and caller ID ring-tones. You can upload your old phone contacts via the SIM card with ease. Using the phone against your face still feels a tad bulky when compared to normal phones but better than average for a hybrid device with all these features. Like the last version, you have to swivel the phone open, dial, then swivel it closed again to use it comfortably as a phone. This is where voice dialing & a speakerphone would have been a good idea. Well, you still have the usual headset option. Phonebook integration is as easy as roll and click.

SMS: The use of the keyboard can’t be under-rated. I hate predictive, T9 and Tap input on normal cell phones and much prefer the thumb board. Sending messages is as easy as e-mail. Although many of my friends don’t carry a mobile e-mail device, they ALL carry a cell phone.

Address Book: The software is straightforward and easy to manage. Sadly, there is still no direct synchronization with Outlook or other popular PIMS so you can either export them from Outlook and load them onto a webpage where the contacts get instantly transferred to your device; or plug them manually.

Calendar: Much like contacts, you’ll have no problems here. Again, auto updated on line, No Outlook sync.

Notes: This basically just serves as a memo pad. You can have up to 50 with 8000 characters each. Still no copy and paste but it is promised in the upcoming OS release. Maybe we’ll see a spreadsheet app too.

Camera: The specs show that the 120×90 pixel cam included with the original has been boosted 320×240 and you can hold up top 36 shots. Sadly, it wasn’t included with my demo unit. You can have a look at existing shots on one of the fan sites. Like the previous Hiptop, the camera accessory plugs into the side of the unit and let’s you e-mail them on the fly. On the wish list – integrated camera.

Games: Although the last one came with 3 or so games, this one only came with the asteroids clone. The reason for this was the expiration of a license to EI games forcing them to yank the others. Danger has since posted the news of a hidden easter egg game called SnowBored in the OS you can play. To access it:

A. Press the Jump button, then press the Menu button and select Settings >> About Sidekick.
B. Press MENU + SHIFT + 8 together. SnowBored appears!
C. Navigate through the terrain by holding down the wheel or any key. 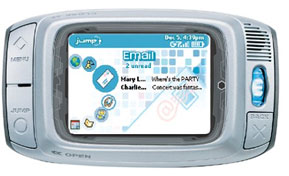 Since I tend to only ever play games on my phone when I’m waiting in line, more simple card /quick games would be handy. The word is that a downloadable games service will be available in the near future.

I really like the unit. It does what it promises and has yet to crash on me. It’s definetly a bigger bulk in the pocket than one would be used to in a modern cell phone, but it’s still far less than carrying both a phone and a PDA seperately. Still the best bargain in the PDA/Phone maket, the unit is available via Fido for $375 on a plan. Although the lack of third party apps (a la Palm & PocketPC) may be a con for power users always looking for new options, the value, simplicity, and reliability of the Hiptop make it well worth the recommendation.