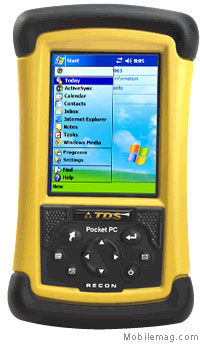 TDS is launching the new Recon at AUSA, the largest military trade show in the world. The Recon will also be exhibited at the Pocket PC Summit 2003 in Las Vegas, October 20-23.

The addition of Windows Mobile software to the Recon brings the most popular handheld applications to users working in extreme temperatures, driving rain, dusty job sites and other harsh environments.

“We’ve had a large number of customers ask for Windows Mobile software since we introduced the Recon,” said TDS president Dave Scribner. “Windows Mobile 2003 software for Pocket PCs is the most popular operating system for handheld computing, so adding it to the Recon gives our users field access to the applications they use most.”

“Mobile professionals who work in harsh environments have been requesting small computing devices that are tough, allowing them to stay wirelessly connected during their entire work day,” said Doug Dedo, marketing manager for the Mobile Devices Division at Microsoft Corp. “The new TDS Recon Pocket PC using Windows Mobile 2003 software for Pocket PCs provides these workers a platform on which to conduct their business.”

The Recon is designed for all-day operation in extreme outdoor and industrial environments. It exceeds the MIL-STD-810F military standard for drops, vibration and temperature extremes. It also comes with an IP67 rating, meaning it’s impenetrable to water immersion and dust.

The Recon’s rugged construction makes it ideal for land surveying, mapping, civil engineering and construction, forestry, utility, facilities and asset management, machine control, law enforcement and military applications. It weighs just 17 ounces, and its rounded edges provide a comfortable grip. Large, widely spaced buttons are easy to use, and its reflective color TFT display is bright and clear in sunlight.

The Recon comes with a 200- or 400-MHz Intel XScale processor, 64 MB of SDRAM and up to 128 MB of internal nonvolatile Flash storage. It also features two CompactFlash slots, plus a standard 9-pin serial port and a high-speed USB port for connecting to a PC. The standard PowerBoot Module(TM) features a 15-hour rechargeable NiMH battery.