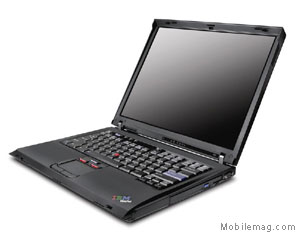 Because smaller, lighter, and more mobile systems are at a continual risk of being dropped and damaged, IBM developed a patent-pending hard drive protection technology to help protect people’s data. The IBM Active Protection System, similar to the technology used in automobiles to deploy airbags upon impact, uses a microchip on the system board to detect system acceleration (such as in a fall). The system responds by temporarily parking the drive’s read/write head until the system is stabilized. This rapid response can help prevent hard drive crashes that could occur in some falls, to help prevent total data loss and reduce warranty costs.

Some insurance and analyst reports indicate that more than 10.5 percent of notebooks in a corporate enterprise are damaged annually, and that accidental damage accounts for the majority of PC loss claims. Of the three notebook components most prone to damage — hard drive, display, and keyboard — hard drive damage results in the loss of valuable information and productivity.

“Applying this life-saving technology to personal computing is revolutionary. If you’re rushing to finish a report in an airport and you accidentally drop your notebook, with any other machine you’d face a greater potential for losing all your data,” said Peter Hortensius, vice president, Think Offerings, IBM Personal Computing Division. “IBM is committed to providing our customers with the most reliable notebooks in the industry. This new technology and Rapid Restore Ultra are two great ways of doing that.”

Choose How You Work
The new ThinkPad R50, available in 14 and 15-inch models, has a travel weight of less than 6 pounds and measures 1.3-inches thin. The ThinkPad R50 features a long-life battery, and by adding a second system battery option users can achieve almost 10 hours of battery life, providing users with a truly mobile computing experience. Select ThinkPad R50 and T41 models are available with Intel Centrino Mobile Technology or with integrated IBM 11 a/b/g wireless. Both the ThinkPad R50 and T41 feature select models with the IBM Embedded Security Subsystem and, when used with industry-standard wireless encryption, provide the most secure wireless computing environment in the world.

New models of the ThinkPad R40 and R40e offer users a reliable, mobile computing experience at an affordable price. Both models feature Intel Pentium 4-M and mobile Celeron processors and have a travel weight of less than 6 pounds. The ThinkPad G40, with the Intel Pentium 4 processor on select models and up to 3.0 GHz of processing power, features the ThinkPad EasyPivot base and ComfortSlant keyboard, design enhancements developed for a more comfortable and enjoyable computing experience.