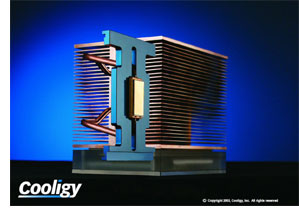 Cooligy, Inc announces today a new technology for active cooling of microprocessor “hot spots.” Initially demonstrated at Stanford University, Cooligy’s Active Microchannel Cooling(TM) technology can effectively cool the next breed of powerful, hot microprocessors destined for the next generation of workstations, servers and high-end PCs. For the first time, Cooligy is unveiling the technologies that form the core of Cooligy’s Active Microchannel Cooling system.

The next generation of microprocessors, the semiconductor “brains” of computers, not only produce higher overall temperatures but also create one or more concentrated hot spots of particularly high heat on the chip. These hot spots, typically found above areas where the most amount of work is performed on the chip, must be kept to within a specified temperature to ensure high-performance and reliability. Traditional means of cooling these chips, such as heat sinks, fan sinks and heat pipes, require a large mass of metal to passively absorb and spread the heat to air-cooled fins. These passive technologies cannot effectively cool the hot spots produced in next generation microprocessors.

Cooligy’s Active Microchannel Cooling technology utilizes highly efficient means to absorb heat from the chip’s hot spots and quickly dissipate it to keep the chip cool. The Cooligy cooling system employs a heat collector fabricated from a thin layer of micro-machined silicon that fits on top of a microprocessor package. A very dense area of Microchannels etched into the silicon enables fluid to circulate through the heat collector and efficiently absorb and take away heat. Cooligy’s system has been shown to effectively cool microprocessor hotspots of up to 1000 watts per square centimeter.

The Cooligy approach also employs a new, innovative solid-state Electrokinetic pump. The Electrokinetic pump circulates the fluid in the cooling system through the Microchannel heat collector and to the heat radiator that transfers the heat to air. With no moving parts to wear out, this noiseless pump — the first of its kind — is small, cost-effective and highly reliable for long-term use.

Although some form of fluid cooling has existed for the most sophisticated computer systems during the past four decades, none have provided the precision, reliability or cost effectiveness needed to cool the hot spots of the next generation of microprocessors. Cooligy’s Active Microchannel Cooling and its innovative solid-state Electrokinetic pump is the first solution to solve the difficult cooling challenge presented by intense hot spots in future chips.

The company will begin supplying qualification systems to computer systems developers and manufacturers later this year.