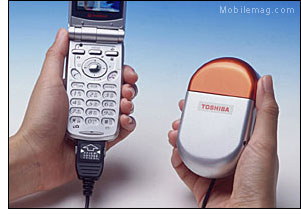 Toshiba Corporation today announced a prototype of a highly compact, direct methanol fuel cell (DMFC) that opens the way to the use of DMFC as an alternative power source to recharge batteries for personal devices as small as cell phones, digital still cameras, PDAs and mobile TVs. The new DMFC will provide greater freedom for users to easily recharge the batteries in a mobile environment, whether they are away from home, traveling on business or out on a beach. The new DMFC is small enough to fit in a carry-on bag or even in a jeans pocket as a portable power source.

Toshiba led the industry in announcing the first DMFC for portable PCs in March this year. The latest announcement confirms that the company remains a step ahead of its competitors in developing the potential of fuel cells. Toshiba expects to commercialize DMFC for both portable PCs and handheld products within 2005.

Toshiba’s new DMFC for portable devices realizes an average output of 1 watt per hour for approximately twenty hours of operation as total on a single 25cc fuel cartridge of high concentration methanol.

Drawing on know-how gained in its work on DMFC for portable PCs, Toshiba achieved the miniaturization necessary for a fuel cell for use with handheld products by minimizing the size of auxiliary parts, such as the fuel tank, the liquid and air transmission pumps, the interface and electric circuits and the DC-DC converter. The methanol fuel is also stored at a high concentration, allowing the fuel cartridge to be reduced to a volume of only 25cc. The fruit of these development efforts is a DMFC with a volume off only 140cc; a DMFC that fits snugly into
the palm of the hand.

Toshiba will present the DMFC for portable devices at CEATEC JAPAN 2003 in Makuhari Messe to be held in Chiba prefecture, Japan from October 7 to 11.

Toshiba will continue development of DFMC technology, with the aim of product commercialization for portable PCs and cellular phones within 2005.