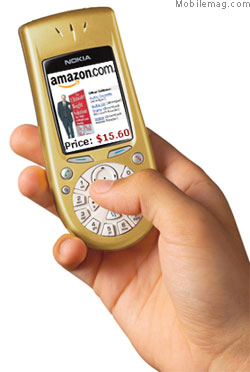 NeoMedia Technologies, Inc. announced today that it has introduced its patented PaperClick technology which links book shoppers to price and availability information at amazon.com through wireless phones or personal computers.

Charles T. Jensen, president and acting CEO of NeoMedia, said PaperClick for Camera Cell Phones can read ISBN (for International Standard Book Numbers) codes, which are on virtually every book published in more than 159 countries, and use that information to link users to information on Amazon.com’s Web site.

“Now, shoppers can take out their Nokia 3650 camera phone at Barnes & Noble, Border’s, or just about any other book store, and just take a picture of the ISBN on the book to comparison shop at Amazon.com right on the screen of their wireless Web browser,” Jensen said. “It’s kind of a high-tech version of the Santa Claus at Macy’s(R) sending Christmas shoppers to Gimbels in the classic movie, ‘Miracle on 34th Street’,” he mused.

A Fortune 500 company based in Seattle, Amazon.com opened its virtual doors on the World Wide Web in July 1995 and today offers “Earth’s Biggest Selection.” Amazon.com seeks to be Earth’s most customer-centric company, where customers can find and discover anything they might want to buy online, and endeavors to offer its customers the lowest possible prices. Amazon.com and sellers list millions of unique new and used items in categories such as apparel and accessories, sporting goods, electronics, computers, kitchenware and housewares, books, music, DVDs, videos, cameras and photo items, toys, baby items and baby registry, software, computer and video games, cell phones and service, tools and hardware, travel services, magazine subscriptions and outdoor living items.

PaperClick is First ‘Killer App’ For Wireless Phones
Earlier this month, NeoMedia, an innovator and international leader in making information faster and easier to access, introduced PaperClick for Camera Cell Phones, available first for the Nokia(R) 3650 camera phone (see “NeoMedia’s New ‘Killer Wireless App’ for Nokia Camera Cell Phones Turns Internationally-Popular Toys Into Internet-Enabled Business Tools,” Business Wire, Sept. 8). PaperClick reads UPC/EAN and other bar codes – including ISBNs – through the camera’s screen to link the user quickly and directly to the corresponding Web site or information, and is the first in a series of PaperClick applications. PaperClick can also be used on PC’s, either scanning or entering UPC/EAN and IBN codes.

“When PaperClick for Camera Cell Phones was introduced, we said it would help turn these internationally-popular toys into Internet-enabled business tools,” said Chas Fritz, NeoMedia’s chairman. “Everyone who has seen PaperClick For Cell Phones calls it ‘the killer wireless app’ for this burgeoning marketplace,” he said. “And everyone who has seen it work with ISBNs and Amazon.com is, quite simply, absolutely amazed!”

Direct Link the Internet
Pioneered and patented by NeoMedia, PaperClick reads and decodes UPC/EAN or other bar codes to link users to the Internet, providing information and enabling e-commerce. It employs a standard browser, optional client software, and a network of online service and applications servers transparent to the user, who simply takes a picture with the phone and is automatically connected to tailored on-line Web information.

PaperClick For Cell Phones for the Nokia 3650 phone is expected to be available in the fourth quarter, with versions for other popular Nokia Series 60 phones, including the Nokia 7650, and phones from other leading manufacturers to follow.