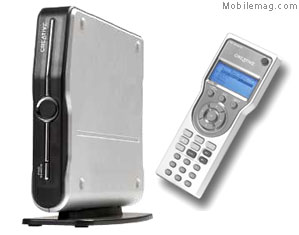 Creative Technology Ltd., today announced Sound Blaster Wireless Music, an easy to use wireless music system consisting of a RF remote control with built-in LCD screen and a digital receiver designed to play entire MP3 and WMA music collections stored on the PC anywhere in the home. The innovative remote control allows users to access and select their music on the built-in LCD without having to use a TV for music navigation. The digital receiver works seamlessly with existing 802.11b or 802.11g wireless networks and connects to any powered speaker or home stereo system. The Sound Blaster Wireless Music is slated for availability in October 2003 with an estimated street price of US$249.99.

“Finally, a wireless music system that’s designed right,” said Mala Sharma, director of product marketing for Creative Labs, Inc. “Other companies don’t deliver wireless solutions that fit into the way consumers really want to experience music; they require the use of a TV for music navigation which limits playback to only those rooms with a TV. The Sound Blaster Wireless Music will change the way you listen to music in your home. Its revolutionary remote control allows users to navigate through their digital music collections right from the remote’s LCD, and select and play their music wherever they want-whether in the living room, kitchen, patio or bedroom.”

RF Remote Control with Built-in LCD
Sound Blaster Wireless Music includes a RF remote control with a large LCD that enables users to view all of their music directly on the remote, eliminating the need for a TV. Music menu controls allow users to browse through their MP3 and WMA music collections and select songs and playlists they want to hear. Dedicated Player Controls on the remote make familiar playback and volume control functions hassle-free, and the Preset Playlist Buttons enable the user to start their favorite playlists or Smart Playlists at the touch of a button. Since the remote uses RF communication, it can be used from anywhere in the room even if the receiver is out of sight.

Easy to Set-up System
The Sound Blaster Wireless Music receiver can connect automatically to an existing 802.11b or 802.11g network using its Automatic Network Detection feature. A straightforward USB set-up also ensures a smooth installation for consumers who have a secured (WEP enabled) network or in areas with multiple networks.

Sound Blaster Wireless Music can be connected to powered speakers to work as a stand-alone music playback system using standard RCA connectors. The wireless receiver also connects directly to home theater systems for high-quality digital playback using the optical (SPDIF) connector. Up to four Sound Blaster Wireless Music receivers can be installed, extending the music on a single PC into multiple rooms so that users can choose different types of music to be played in different rooms simultaneously, or can even pull from the same source to play the same music.

Creative MediaSource(TM) software is bundled with Sound Blaster Wireless Music for CD ripping and easy organization of digital music collections, as well as for defining parameters for Smart Playlists. Smart Playlists are dynamic lists of songs pulled from the entire music collection based on the user’s preference.

Pricing and Availability
The Creative Sound Blaster Wireless Music is now available through www.creative.com and will be available through other major online and retail outlets in October 2003 for an estimated street price of US$249.99.