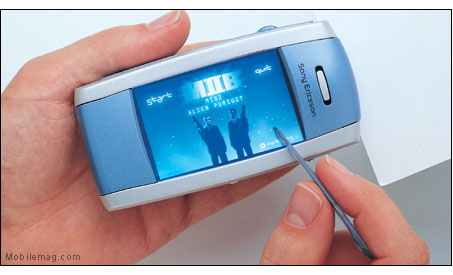 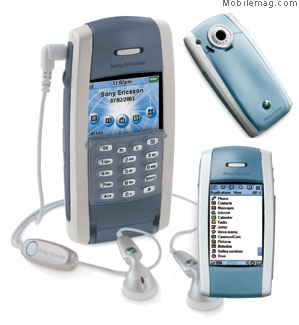 Cellular phone technology is advancing at an increasingly quickened speed. Necessity blends inconceivably with lavishness, presenting a new breed of communication devices. Mobile phones are no longer the oversized behemoths you may remember fumbling with only five years ago. Companies such as Samsung, Nokia and Motorola are designing state of the art products that increase voice clarity, pocket size and downright sexiness.

The Sony Ericsson P800, although not as concerned with size, is a conglomerate of literally dozens of functionalities. It includes enticing features such as a digital camera, MP3 and MPEG-4 playback, a USB synchronization dock and PDA capability – along side the usual phone attributes.

As a digital camera, the P800 delivers mixed feelings. The fact that you have a camera with you at all times in such a small format is a notable aspect. A camera button, strategically positioned on the top right side of the phone for quick and easy use, acts as a hotkey for launching the CommuniCam imaging program as well as the shutter.

Once the CommuniCam is activated, it is a one-click process to snap a still and save it to disk. Pictures can be stored on the internal 16 MB inbuilt storage or an external memory stick card. That said, the CommuniCam is a testament to the cameras that are present in today’s line of cellular phones: poor resolutions and pixelization. The P800 boasts some nice features for a simple camera: a night mode, mute shutter and delay timer. However, we found that the “night mode” does little when taking pictures in dim lit areas and forget all hope of snapping photos in the dark. The camera is for entertainment value only – don’t expect a replacement for your Canon Powershot G5 just yet.

Sony paid close attention to the P800’s size and its 4.6 inches in height provide a condensed form when compared with the standard smart phone. It is 2.3 inches wide, has a depth of 1 inch and weighs in at a reasonable 5.5 ounces. Available in Electric Blue or Mineral Gray, it is a sharp looking device. With the optional keyboard open or removed, this trendy Ericsson possesses a 16-line, 4,096 colour display acting as a fully functional PDA. Movements in the Symbian OS can be directed by way of the stylus or any other screen-sensitive means.

The Symbian platform enables P800 users to download java and C++ apps to the phone. Accessing the latest content available is a snap with the highband connectivity function.

The second button under the grey CommuniCam key allows users to launch their WAP browser in an efficient, one step process. The P800’s keyboard and stylus are translucent; the stylus acts as a shield for the memory card that is inserted beneath it, into the side. Some may find that the keyboard inhibits the asthetics of the P800.
Removing the numerical keypad, it takes on the looks of a PDA in a phone’s body, producing an eye-catching form. The keys are rather troublesome to use anyway because of their size and stiffness. Most users will find themselves accessing the Ericsson’s menu more than the keyboard itself, forcing you to flip the panel back and forth, which could have been an easily avoidable nuisance.

Chock full of useful utilities, the P800 includes: conference calling, voicemail, text messaging, caller id, picture id, an alarm, a phone book (which can be updated via USB with Outlook), a calender, memos and a viewer (capable of viewing PDF and PowerPoint presentations). The built-in browser is configured for WAP and XHTML capable websites. Finally, for the phone that it primarily is, the P800 features voice activated dialing, a voice recorder and speaker phone. You can even snap pictures of your friends and assign their images to the contacts in your phonebook. That way, when an incoming call is highlighted, their image appears along with their name and number.

When the fanciful trimmings are removed, the Ericsson P800 is a phone at heart. With Tri-Band calling, the P800 is capable of operating on three separate GSM lines of digital communication – 1900, 1800 and 900. GSM uses narrowband TDMA (or Time Division Multiple Access), splicing multiple calls onto the same data transmission. Simply put, Tri-Band takes this system and perfects it, allowing high-quality calling from just about anywhere in the world – though the highest levels are reached in Europe and Asia.

Hearing all the digital marvel surrounding this phone, we had pre-emptive expectations for its performance. Yet, in testing it through the Fido service in Canada, it lacked the glass-like clarity other GSM-enabled phones had produced. It was obvious to the recipients of calls placed from the P800 that they were being called from a cell. Furthermore, volume levels would fluctuate occasionally and calls would fail to place. This could be more of a failing of the Fido network than the phone itself, but it was disappointing nonetheless.

This not to diminish its abilities, as the Sony Ericsson is a fine cell phone. It generally produced acceptable voice quality and its signal range would be far higher than many other cells in the same area. Additionally, the reports on the P800’s performance have varied depending on the demographics involved. As is typical with mobile phones, your service will fluctuate depending on what plan and provider you choose. However, the multitude of other uses the P800 has can substitute for it’s exorbitant price.