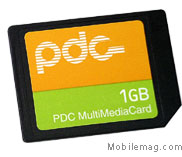 PDC has begun manufacturing 1GigaByte MultiMediaCards today. Using the same patented injection technology as its standard MMC product series of 8MegaByte to 512MegaByte MMC, PDC breaks the density barrier as it upgrades its MMC to the GigaByte level. The next density targeted for development is the 2GigaByte MMC, and release is expected in 2004.

PDC’s launch of 1GigaByte MultiMediaCards allows MMC to be more advanced than most memory card types on the market in terms of density capacity. MMC application developers now can develop even more dynamic multimedia applications without any concerns on density constraints. High density MultiMediaCards are expected to expedite the popularity of contents in form of games, music, or other multimedia applications to be used in handheld devices. As camera phones become more popular, it is expected that higher pixel sensors will be used into these camera phones; and thus, increasing demands for higher density MultiMediaCards.

According to PDC predictions, mobile phones will lead the way to overwhelming demands for memory cards. The mobile phone will eventually become a platform for content and applications, making the memory card an indispensable accessory. When the mobile phones start to have 3.0megapixel sensors, more memory demand will be created. There will be games, pictures, streaming videos, data, voice recordings, etc. on the phone; and the only place to store the contents in are memory cards. Besides having the advantage of its smallness in size but yet having a large density capacity, the MMC is also very low in power consumption, suitable for handheld devices. Since the MMC is a standard accepted by Nokia, Samsung, Siemens, Motorola, and many other mobile phone manufacturers, there is a great possibility that MMC may become the defacto standard as a mobile phone memory card.