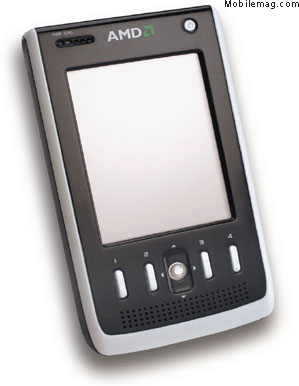 Trying to keep up with the current PDA market, AMD Inc. has unveiled an updated reference design for their Linux OS powered PDA that was shown this past August at the LinuxWorld Conference & Expo California.

The design is one step closer to bringing a commercialized product to the market, but a few steps behind other devices like the Sharp Zaurus and CDL Linux PDA with built-in Biometrics. The PDA is based on AMD’s Alchemy 1100 400MHz processor. Since the first unveiling of the prototype, AMD has added advanced features to the design such as full-screen video capabilities, and internal battery charger said Phil Pompa, Vice President of Marketing for AMD’s Personal Connectivity Solutions Group said.

Since then, AMD has advanced the prototype’s design with the addition of full-screen video capabilities and has completed work on the device’s battery charger, said Phil Pompa, vice president of marketing for AMD’s Personal Connectivity Solutions group, in an interview on the sidelines of the Computex exhibition here last week.

The Alchemy 1100 based PDA will run Metrowerks Corp.’s Linux-based OpenPDA software suite. This includes an embedded Linux kernel and a range of software, such as applications for playing music and video files. With support for Trolltech AS’s Qtopia multilingual user interface, Opera Software ASA’s Opera Web browser, and support for both Personal Java and J2ME (Java 2 Platform Micro Edition).

AMD is hoping the end user will appreciate the full-screen video playback as the key feature. It works without a graphics processor and any screen artifacts of the PDA reference design, said Pompa.