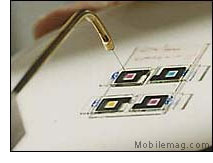 Two scientists at the company’s research facility in Eindhoven describe the latest step forward in e-paper technology in the journal Nature.

Philips – and other firms like E Ink in the US – have already succeeded in making prototype flexible displays, but their refresh rates – the speed at which they can turn a single dot on or off – have been slow.

These previous prototypes have used a principle called electrophoresis to switch pixels on or off.