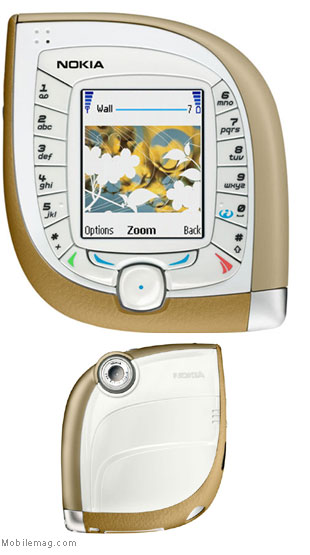 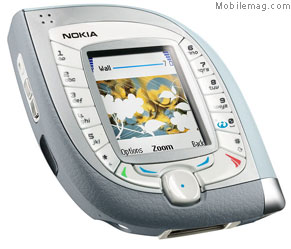 Launched in conjunction with the 100% Design exhibition in London, Nokia today announced the radically shaped Nokia 7600 phone combining 3G capability with the latest mobile imaging features in a futuristic exterior. Taking Nokia design to a new level, the device incorporates a 65,000 color screen as the heart and soul of its front face. The Nokia 7600 enables people to capture pictures and videos, send and receive multimedia messages* and mobile email and listen to music. With this phone, people can also take advantage of the increased speed of the next generation of mobile networks by watching good quality live video content directly from their handsets. Weighing a mere 123 grams and measuring 87mm x 78 mm x 18.6 mm, the Nokia 7600 is one of the lightest and smallest GSM/WCDMA phones in the world.

Operating in GSM900/1800 as well as WCDMA (Wideband Code Division Multiple Access) networks, the Nokia 7600 is expected to be available in volume in Europe, Africa, Middle East and Asia-Pacific in fourth quarter of 2003. WCDMA is a third-generation mobile wireless technology offering much higher data speeds and better quality of service to mobile and portable wireless devices than current mobile networks.

The Nokia 7600 phone opens a new door to the world of multimedia communications. People can view pictures taken with its VGA camera on an illuminated display with over 65,000 colors, as well as capture video clips, with audio, of up to 2,5 minutes each. In a WCDMA network, it is possible to send and receive video clips and pictures even during a phone call. The device also allows people to enjoy high-quality audiovisual content, such as real-time music videos or television news, as they are downloaded via the mobile Internet.

The integrated MP3/AAC music player can play up to 50 minutes of near CD-quality music saved on the internal memory of the device. Music and other content can be downloaded using mobile services while on the move or locally from a compatible PC via infrared, Bluetooth or USB connection. With the XHTML browser, users can browse graphically rich mobile services. Other features of the phone include polyphonic ring tones, support for Java applications and a data connection speed of up to 384 kilobits per second in WCDMA networks. The phone has talk time of up to 4 hours in GSM networks and up to 2,9 hours in WCDMA, and stand-by time is up to 12,5 days in both networks.