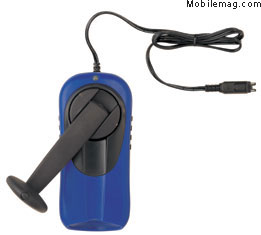 Reuters reports — This must have happened to you: it’s the end of the day, you need to make an urgent call, your mobile phone’s battery is down, and you are nowhere near an electricity socket.

“It is not meant to replace the regular charger, but it is great for emergencies,” said Nobumasa Neishi, marketing manager at Japan’s Fuso Rikaseihin Co. Ltd, which makes the charger.

Priced at $42, the hand-held generator is quite noisy and not cheap, although it comes with a built-in flashlight. It can be used with phones from Nokia, Motorola, Sony Ericsson and NTT Docomo.

Neishi said Fuso Rikaseihin expects to sell 30,000 chargers in Japan this year and 100,000 in 2004. At a trade fair in Bangkok, the charger was launched for markets in Southeast Asia and China, where power is not always available.

But it also plans to sell the product to camping equipment shops and as an emergency backup in European and U.S. markets.

In the United States, worries about terrorism, natural disasters and electricity black-outs have boosted sales of muscle-powered generators for products such as flashlights, radios and phones.

Last week, hurricane Isabel knocked the power out in six million homes and businesses along the U.S. East Coast.

Fuso Rikaseihin is not the first on the market. Last year, Freeplay, the British company which invented the wind-up radio, and U.S. phone producer Motorola launched the “Freecharge,” a charger for Motorola and Nokia phones.

Adaptors for other brands are in development, Freeplay said on its Web Site.