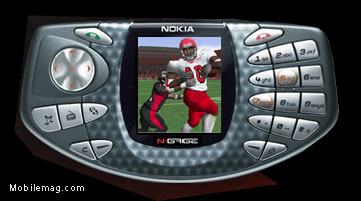 “There’s a lot of excitement about the connectivity features of Nokia’s N-Gage,” said EA Executive Vice President of North American Publishing Nancy Smith. “We believe there are a lot of interesting possibilities for providing downloadable features for players of both EA SPORTS and EA GAMES titles.”

“We are obviously very excited to be announcing our first EA title for the N-Gage – NCAA Football 2004. With Nokia’s longstanding involvement in college athletics and our Nokia Sugar Bowl title sponsorship, the synergies are tremendous,” said Pasi Polonen, Director of Game Publishing, Entertainment and Media Business Unit, Nokia Mobile Phones. “With the multiplay features of NCAA Football 2004 on the N-Gage, two players can compete head-to-head in real time, putting the excitement of an NCAA football game into their hands.”