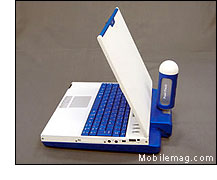 Martyn Williams, IDG News Service — NEC has reduced the volume of a prototype fuel-cell for notebook computers – unveiled just over two months ago – by 20 per cent while maintaining the same power output.

“We’ve been able to make it smaller and more compact, but it is able to generate the same amount of power even though it is smaller,” she said. The fuel cell’s size reduction has resulted in a rise in output density.

The latest prototype achieved an output density of 50 milliwatts per square centimetre, up 20 per cent from the June prototype and was currently the highest in the industry, NEC said.

Except for the size, precise details of which were not announced, other specifications remain unchanged.

The fuel cell can deliver an average of 14 watts of power with the maximum pegged at 24 watts. Output voltage is 12 volts and the fuel cell weighs 900gm, of which 300gm is fuel.

Running from a full tank of 300 cubic centimeters of fuel, which is methanol with a concentration of 10 per cent, the cell could provide enough power to run a notebook computer for about five hours, the Tokyo company said.

NEC is one of a number of companies investigating the possibility of using methanol fuel cells in notebook personal computers and other portable devices.

In June, the company announced plans to commercialise the technology before the end of 2004.

It hopes to have advanced to a 40-hour fuel cell for notebook computers within two years.

Yesterday, NEC reiterated its plans to launch a fuel cell powered notebook by the end of next year and said the 40-hour fuel cell remained a goal to achieve before the end of 2005.

Toshiba unveiled a prototype fuel cell for notebook computers at the CeBIT 2003 trade show in Germany this year. The company also set a goal to commercialise the technology sometime during 2004.