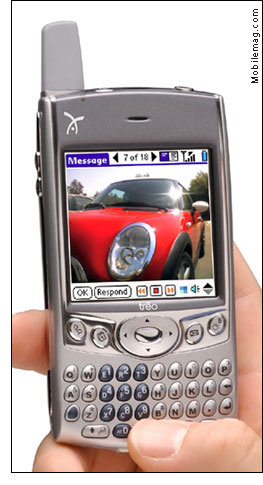 By Braden Reddall, Reuters — French-owned mobile phone company Orange launched the first retail version of the award-winning Treo 600 on Wednesday, a combined handset and digital organiser made by US company Handspring Inc.

The launch represents an important move for Handspring in the European market and another attempt by Orange to establish a solid foothold in a crowded market for so-called “smartphones”.

With a slimmer design to help attract cellphone users, the Treo 600 features e-mail, Web browsing and an MP3 music file player, and can snap and send pictures from an embedded camera.

Palm Inc, which is in the process of buying Handspring, will provide its OS5 personal information management software for the new Treo, which was named “Best of Show” at the CeBit America technology conference in June.

Handspring CEO Donna Dubinsky, noting that the new Treo looked set to go on sale in Europe before the US, said it represented a good example of the much-discussed convergence between mobile and computing technologies.

“It seems like it would be obvious how to put these things together, but it’s not,” she told reporters at a news conference in London on Tuesday.

Orange, majority-owned by France Telecom, said that the Treo would sell alongside Orange’s SPV, a smartphone developed with Palm’s rival Microsoft. Orange’s Treo exclusivity in Europe would last for a “significant period of time,” one executive said, declining to give sales targets for the Treo.

Some 100,000 SPVs have been sold since its launch last year, seen by analysts as disappointing compared with the two million Live! phones sold by Orange’s arch-rival Vodafone.

It will soon be available though Handspring’s website and wireless operator Sprint PCS Group in North America.

Industry leaders such as Nokia, Motorola and Ericsson sell dozens of smartphones. Canada’s Research In Motion continues to sell Blackberry devices, and some phone makers sell models driven by software from Symbian and Microsoft.

The Treo 600 model also features an expansion slot for portable memory cards and a built-in camera. It will be available in the CDMA and GSM-GPRS mobile communication standards, depending on the version of the product.