Microsoft Corp. today unveiled Wireless-G, an innovative Wi-Fi-certified 802.11g wireless networking solution. Utilizing powerful security technologies, the new lineup of wireless networking products enables consumers to simply share a broadband Internet connection, information files, printers and more between all the computers in the home — at up to five times the speed of a typical 802.11b wireless network.

The new products introduced today are Microsoft® Wireless Base Station MN-700, a router with an integrated 802.11g wireless access point and four-point Ethernet switch; Wireless Notebook Adapter MN-720, which adds a notebook computer to the wireless network; Wireless PCI Adapter MN-730, which adds a desktop computer to the network; Wireless Notebook Kit MN-820, with everything users need to create a wireless network for a desktop and notebook; and Xbox Wireless Adapter MN-740, the only comprehensive, first-party solution for high- performance Xbox gaming without the hassle of wires.

“Wi-Fi is an exploding technology with adoption growing at a rapid pace,” said Todd Greenberg, product manager for Microsoft Broadband Networking. “Microsoft Wireless-G products feature standards- based technology to ensure compatibility; an enhanced, proprietary Setup Wizard for easy network setup; and premier security out of the box, making it easy for consumers to join this trend.”

Microsoft’s proprietary Auto Update service automatically sends a message when updates are available, keeping consumers up to date with ever-changing software enhancements. The Wireless Base Station MN-700 is powered by Windows® CE .NET 4.2, enabling Microsoft, its partners and other developers to create additional applications and benefits for customers.

Wireless-G supports speeds of up to 54 Mbps and includes Parental Controls, the first key feature written for the flexible Windows CE platform. Parental controls allow parents or employers enhanced control over access to Internet content via the network.

Co-developed by Xbox and Microsoft Broadband Networking, Xbox Wireless Adapter enables gamers to play on the Xbox Live service from any Xbox-connected television in the home — without wires — by adding Xbox to an existing 802.11g or 802.11b Wi-Fi network.

The newest products from Microsoft Broadband Networking are ratified by the Institute of Electrical and Electronics Engineers (IEEE), have Wi-Fi interoperability certification, and are compatible with existing wireless networks and hot spots.

“To reach its full potential, Wi-Fi depends on standards-based technologies that combine high performance and tight security in an easy-to-use consumer package,” said Jonathan Gaw, research manager for home networking at IDC. “Certified interoperability, performance, security and simplicity in installation and maintenance, such as what is available from Microsoft, will be key to the spread of wireless networks both in the home and at public hot spots.”

Leading With the Right Partners
“We are excited that Microsoft is launching Wireless-G with Broadcom technology, which provides the best solution for consumers and small businesses transitioning to 54Mbps Wi-Fi networks,” said Clint Brown, director of Business Development in the Home and Wireless Networking Business Unit at Broadcom. “Microsoft’s unique software enhancements will allow customers to experience maximum performance, greater range and robust security offered by 54g™-based products.”

Why Go Wi-Fi
The fact that 30 million Americans log on to the Internet at home with a broadband connection indicates a growing need for Wi-Fi technology.* The benefits of Wi-Fi include the following:

– Sharing a broadband Internet connection. For example, Wireless-G from Microsoft makes it easy for Mom to work online while her kids use the same Internet connection for schoolwork from a different computer — all without the hassle and mess of wires.

– Enjoying the freedom of Internet access. With a wireless home network, Internet access is no longer tied to the wall. In the home, networked laptop users can stay connected to the Internet settings from the living room to the deck. On the road, the Internet can be accessed via thousands of public hot spots, often found in cafes, hotel lobbies and other well-traveled areas. 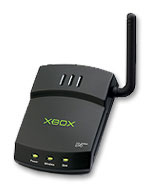 – Sharing files, printers and information between computers. With a wireless network, consumers no longer have to e-mail or save large files to a disk to access the data on multiple computers. Saving information to the shared network drive makes information available on any networked computer, at any time.

– Interactive, online gameplay — without wires. With Xbox Wireless Adapter, gamers can play on Xbox Live without a cumbersome Ethernet cord running from the Broadband Internet connection to the Xbox console by adding Xbox to an existing 802.11g or 802.11b Wi-Fi network. Once Xbox is added to a network, gamers can wirelessly experience Xbox Live gaming from any Xbox-connected television in the home, without messy cables or holes in the wall.