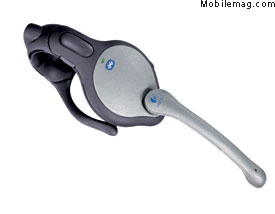 Logitech is bringing the power of Bluetooth wireless technology to its line of mobile phone headsets with today’s introduction of the Logitech Mobile Bluetooth Headset. Now, users of mobile phones with built-in Bluetooth technology can enjoy a comfortable cordless headset that offers fingertip controls and extended talk time. The Logitech Mobile Bluetooth Headset will be available later this month in U.S. retail outlets and online at www.logitech.com at a suggested retail price of $99.95.

The Mobile Bluetooth Headset, which extends Logitech’s cordless headset offering, lets people conduct calls up to 30 feet away from their mobile phone — providing much-needed freedom from tangled cords. The headset offers up to eight hours of continuous talk time and more than three weeks of standby time. It includes a premium noise-canceling microphone, which ensures clear sounding calls even in environments with high background noise. With its flexible soft touch wrap-around design, the Mobile Bluetooth Headset fits comfortably on either ear and weighs less than one ounce. It comes with a portable charging station, which also serves as a protective case.

“Logitech’s new Mobile Bluetooth Headset provides a robust cordless solution at a very reasonable price,” said Ray Weikel, director of product marketing for Logitech’s Audio Business Unit. “Logitech has incorporated the latest generation of Bluetooth wireless technology into this product, which means additional user benefits such as an extended battery life. The headset was designed specifically with comfort and safety in mind — it is extremely easy to put on or take off with one hand.”

As an added convenience for people on-the-go, Logitech is offering a separate car charger adapter for $19.95 MSRP — available online at www.logitech.com and through select retailers.