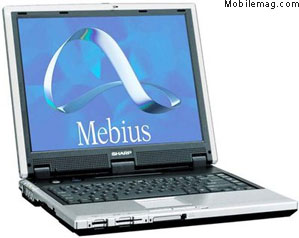 The Mebius PC-RD3D, billed by Sharp as the world’s first 3-D laptop, goes on sale Oct. 27 in Japan and is planned for release later this year in the United States.

Tokyo-based Sharp has been selling cell phones with 3-D displays for NTT DoCoMo, Japan’s top mobile carrier, since November last year. They were so popular the feature is being introduced in notebook computers, Nakayama says.”