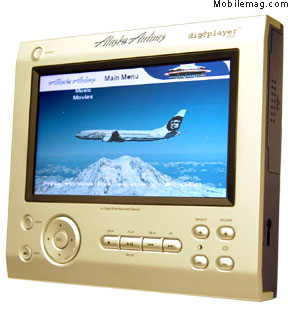 Alaska Airlines announced today that it will be the first airline in the world to offer customers the APS digEplayer(TM), which uses portable, video-on-demand technology to deliver a spectrum of inflight entertainment choices — including first-run movies — in a convenient handheld device.

The announcement was made prior to the World Entertainment Association’s 24th Annual Conference & Exhibition, which begins this morning at the Washington State Convention & Trade Center.

“Offering our customers the latest high-technology inflight entertainment system in the industry is in keeping with our commitment to offer technology that makes flying more satisfying to our customers,” said Gregg Saretsky, Alaska’s executive vice president of marketing and planning. “We’re proud to be the first airline to debut this impressive new system.”

Unlike traditional inflight entertainment systems, the state-of-the-art digEplayer(TM) literally puts the choice of what to watch or listen to in the hands of customers in the form of a portable device about the size of a DVD player, but with superior audio and video quality. And because the content cannot be duplicated or replayed once its proprietary battery runs out, it’s possible to offer first-run movies not yet available on video in addition to its standard fare of classic films, television shows, children’s programming, music and video games. 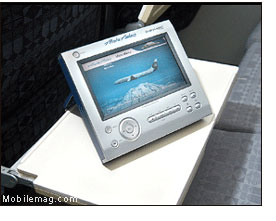 Alaska will offer digEplayer(TM) units beginning in October on all transcontinental flights between Seattle and Newark/New York, Boston, Miami, Orlando, Washington National and Washington Dulles, as well as between Anchorage and Chicago. The units will be available at no extra charge to all First Class passengers, and at least 32 units will be available in the main cabin for rental. Units may also be reserved in advance via alaskaair.com. Initially, a total of nine movies, three television shows and 10 hours of music will be offered.

Content on the units will be provided by Twentieth Century Fox and Digital Music Express (DMX).

“This is one of the most exciting new products I have seen in a long time,” said Julian Levin, executive vice president of digital exhibition, non-theatrical sales and distribution for Twentieth Century Fox. “People today want choices, and for the first time a portable device can offer multiple viewing opportunities in one small package. We are pleased to be the first entertainment company to be involved.”