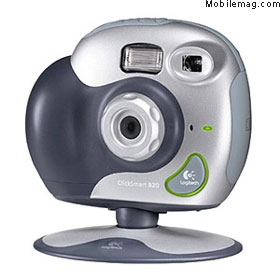 Logitech is making it even easier for people to capture high-quality pictures and share them with family and friends. With the company’s newest DualCam product, the Logitech(R) ClickSmart(R) 820, people can take pictures and videos on-the-go and tag images directly on the camera for email- the pictures will be sent automatically as soon as they are downloaded to the computer. What’s more, this same camera can be used as a webcam, allowing friends and family to stay connected, in real time, through free video instant messaging software. The Logitech ClickSmart 820 is currently available in U.S. retail outlets and online at www.logitech.com at a suggested retail price of $179.95.

As Logitech’s premier DualCam, ClickSmart 820 is an ideal way to capture high-quality pictures at or away from the PC. It features true 2.1-megapixel resolution, 2X Digital Zoom, a 1.5 inch color LCD screen, a built-in microphone and flash. Its 8MB of internal memory can store up to 12 2.1-megapixel images, 64 VGA (640×480) images or 60 seconds of continuous video. People who want to take more pictures or longer video clips can add additional memory to the camera’s removable SmartMedia(TM) memory slot. The camera includes QuickSync(TM) and QuickSend(TM) software, which enables pictures and videos to be instantly downloaded to the PC, and automatically emailed to family and friends. It also comes with an adjustable swivel base, lens cover, wrist strap, and four AAA batteries.

“With its higher resolution and new QuickSend software feature, the Logitech ClickSmart 820 takes the affordable DualCam to a new level,” said Spencer Johnson, director of product marketing for Logitech’s Video Business Unit. “As a product that combines digital photography with Internet-based communication – two activities that are becoming more mainstream in our daily life – it’s an easy way to share special moments with friends and family around the world.”

When attached to the PC, ClickSmart 820 takes advantage of Logitech’s premium Web camera software, which offers activities including:

— Organizing pictures and video in an integrated gallery

ClickSmart 820 uses a USB connection and works with Windows(R) 98, Windows 2000, Windows ME, and Windows XP. A two-year limited hardware warranty is included.