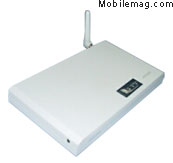 Hitachi developed a new system that measures the terminal position to an accuracy of 1m-3m using several wireless LAN access points. The system calculates the terminal’s location and distance from each access point by measuring how long it takes for the access point placed at every 100m-200m in a grid pattern to respond to radio signals sent from the mobile terminal. At least three access points are needed to ascertain the location.”