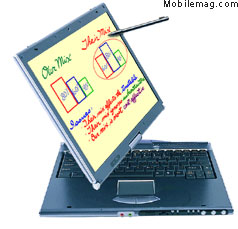 Recent analyst and media reports have expressed concerns about the high pricing of Tablet PCs, which is holding it back from mainstream adoption over laptops. The Pen&Internet and Clevo agreement marks the first full-size tablet computer with a complete note-taking and handwriting recognition solution available from OEMs with a starting price point under $1,000. In addition, the pen laptop screens are larger than any of the consumer pen computers on the market.

“With Pen&Internet’s riteNotes software and our affordable price point, our non-Tablet PC device will establish a new mass market category of practical pen computers,” said Donovan Yeh, vice president of sales for Clevo Computer Company. “The PC industry has been pining for a solution like this to drive the price down and pull consumers to the stores.”

Clevo’s T200 TabletNote pen laptop is targeted to consumers, mobile professionals and students and is slated for commercial availability this fall.

“Our high-quality, economical solution is going to shake up the mobile computing industry,” said Larry Wei, President and CEO of TDV Vision. “Combined with Pen&Internet’s expertise in electronic ink, note-taking and handwriting recognition, we’re offering consumers the best quality and value on the tablet market.”

Clevo’s pen laptops are flexible, convertible notebooks and tablet computers in-one, featuring a 14-inch touch panel display and a built-in pen. The touch screen of new pen laptops makes it easier to replace a pen and operate, compared to tablets with electromagnetic screens, making the devices more economical to maintain for consumers. Additionally, the device has an Intel pro/wireless 2100/2100A Wi-Fi connection and a long battery life.

Developed by Pen&Internet, the riteNotes bundle consists of ritePen™ and riteMail® applications. With ritePen advanced handwriting recognition and pen utility tool, users can intelligently navigate the desktop with the stylus and write on the full screen in smooth electronic ink. Handwriting is automatically converted into text and entered into target applications. riteMail allows users to take high quality notes to be emailed, fully edited, text and shape recognized, exported, stored and smart printed.

“Clevo is pioneering a new mobile category by combining a mainstream notebook computer with a tablet,” said Leonid Kitainik, general manager for Pen&Internet. “We are pleased that Clevo users will benefit from advanced note-taking and seamless handwritten communications with a cost-effective and user-friendly solution.”