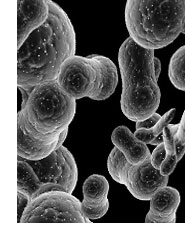 Business Day Paris Reports — “Damnation… your cell phone, on which your work and social life depend, has become a useless lump of plastic and silicon: the battery is dead.

No problem. Just reach for the nearest bowl of sugar, flip open the phone, top up the battery with a wee spoonful, give it a little time – and hey presto, you are connected to the world again.

This sci-fi scenario may lie in the not-too-distant future, thanks to a pair of US-based scientists who say they have invented the world’s first efficient “bacterial battery”.

In a Pentagon-backed project, University of Massachusetts researchers Swades Chaudhuri, an Indian, and Derek Lovley, an American, say the battery’s source is an underground bacterium that gobbles up sugar and converts its energy into electricity. Their prototype device ran flawlessly without refuelling for up to 25 days and is cheap and stable.”