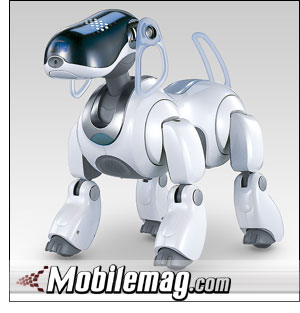 Available in pearlescent white, the newly designed, futuristic ERS-7 AIBO model provides the greatest degree of autonomous behavior and functionality to date. It features a faster CPU, a higher resolution camera and twice as much memory as its predecessors.

With an accompanying software application entitled AIBO MIND (on 32 MB Memory Stick(R) media bundled with the ERS-7), the ERS-7 will allow owners to interact with the robot in numerous ways. For example, AIBO enthusiasts will be able to enjoy interacting with a more fluid autonomous robot via voice and tactile touch sensors, along with the ability to remotely access the robot and retrieve digital images on their PC via e-mail commands or an Internet browser (PC Wi-Fi connection required).

Additionally, later this year ERA will make available a new tool for the ERS-7 entitled AIBO Custom Manager (ACM). With ACM, owners will be able to add new content, via the Web, to their AIBO Mind Memory Stick media allowing them to personalize their ERS-7.

“This latest generation design is a result of significant evolutionary advancements in robotic hardware and software, as well as our analysis of what people want most in an Entertainment Robot,” said Victor Matsuda ERA’s vice president.

The ERS-7 model will also feature Illume-Face, an innovative LED face panel that provides a new way for the robot to express its feelings, emotions and current conditions.

In addition to increased voice recognition capabilities, which allow the robot to understand approximately 180 voice commands, the new model comes equipped with a newly developed visual pattern recognition technology so it can identify 15 credit card sized AIBO Cards that issue commands, change settings and modes. Furthermore, with this technology, the ERS-7 is able to find its Energy Station and recharge itself when its battery runs low.

Additionally, the latest AIBO robot has been equipped with three new infrared distance sensors — two located in its snout and a new edge detection sensor installed in its chest. With the robot’s infrared sensor located in its snout AIBO will be able to better negotiate its environment, avoiding walls and solid obstacles. Further, with AIBO’s edge detection sensor the robot’s ability to detect an edge will be greatly improved reducing the risk of it falling off steep heights.

The new model, which has built-in wireless LAN connectivity, carries a manufacturer’s suggested retail price of $1,599 and includes AIBO MIND software, a recharging Energy Station, one battery, a set of 15 AIBO Cards, an AIBOne (a new toy bone that AIBO can chase and retrieve for fun), AIBO’s favorite pink ball, and the WLAN Manager CD-ROM software.

The ERS-7 will be available, in early November (pre-orders begin on October 10), at the Sony Style Stores (New York, San Francisco and Orange County), the Sony Gallery (Chicago), and online at http://www.us.aibo.com .