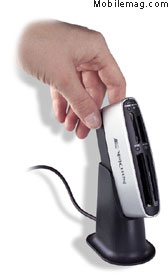 SanDisk Corporation today introduced the SanDisk Hi-Speed USB 2.0 ImageMate(TM) 8-in-1 card reader. Designed for consumers who rely on a variety of flash memory cards for their digital cameras, PDAs, MP3 players or other electronics gadgets, the new ImageMate is targeted at consumers who want a single device to transfer pictures, digital video or any type of data at very fast speeds. The new SanDisk 8-in-1 reader was introduced at the IFA Consumer Electronics trade show where SanDisk is demonstrating products in Hall 3.2, Booth 201.

The new multi-card reader has four slots that accept all industry-standard storage cards including CompactFlash(R) Type I and II cards, SmartMedia(TM), SD(TM) card, MultiMediaCard, Memory Stick(R), Memory Stick PRO and the xD-Picture Card(TM). The four slots can be used simultaneously to transfer data between individual cards and/or the computer.

SanDisk’s new ImageMate 8-in-1 card uses Hi-Speed USB 2.0, a technology that is capable of data transfer rates of up to 480 megabits a second (Mbps) compared with a maximum transfer rate of 12Mbps with USB 1.1. The new reader is backward compatible and works with computers that have a USB 1.1 port.

Matthijs Hutten, SanDisk retail product marketing manager, said, “A growing number of consumers own several different types of memory cards and prefer the convenience and flexibility of a single reader/writer to handle all of their cards. In addition, the USB 2.0 connection offers the ability to transfer large amounts of data very quickly, an important feature for large capacity cards. The ImageMate 8-in-1 reader provides the flexibility, speed and convenience needed to readily handle present and future reader needs.”

The ImageMate 8-in-1 reader has an attractive, silver-metallic look and comes with a docking station that provides a convenience factor for desktop owners who also want to use the ImageMate with their portable computers. For travel, the multi-card reader can be removed from the docking station and used with a short cable included with the reader/writer that allows for easy plug-in to the USB port of portable computers. The 8-in-1 reader/writer also boasts power and activity lights that indicate to users when the device has power and if the cards are properly plugged into the memory slots and ready for use.

The new reader has a suggested retail price of $39.99 and will be available in September at many of the 50,000 stores worldwide that carry SanDisk products.