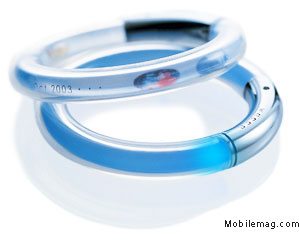 Crossover cabling, straight cat. 5 configuration to a router, maybe WIFI functionality if you’re a new adopter. The current network setups are fairly consistent wherever you turn. Even when factoring the stability of Apple’s Airport Extreme or the mainstream success of Linksys, there seems to be a slight stall in new and exciting innovation for wireless encoding and technologies.

Thankfully, NEC is looking to breathe new life into the industry. Although these new-age devices are currently in the design phase and hold no immediate plans for production, they prove that not every one is content with the current standstill.

Wacca:
Despite its Star Wars-esque terminology, this piece of futuristic heaven is anything but fabricated. Visual memory or in other words, pictures, are the tickets to re-experiencing one’s past and embracing one’s life. WACCA enables this through the physical form of a bracelet, making credit card cameras bow before this king of style and functionality. This tech accessory will supposedly incorporate sensors, allowing the device to capture appropriate angles for its snap shots, despite being worn on the wrist. WACCA will enable the wearer to view images in a number of ways, but the specifics are still unclear.

Nave:
Possibly appealing to both business executives and home users alike, Nave will attempt to replace current video phones and web cameras. Instead of having an incriminating lenses pointing directly towards you, this nifty little device has a 360 degree viewing capability, allowing for an involved conversation session. This could end up being a real hit with teenagers and uber-techies if priced right.

Duo-pc:
This concept has some interesting points and some already tried ones. Basically, the theory is, if notebook owners use their portables on the road and at home, why is there any need for a desktop? I couldn’t agree more. They also decided to add a multi-layered, dual screen interface…nice touch. The problem is, they are basically replicating a Microsoft Tablet PC beyond that point. And you know how well that venture is fairing.

Duo-phone:
Another device with dual displays — could this one possibly have more potential? I believe so. One of the LCDs is detachable, making video conferencing and image capturing a whole lot simpler. Are you one that bought into the first hairdryer/vacuum/toothbrush that hit the market? The Duo-phone can also be used as a mouse and remote control combo for your PC. No doubt, this will couple with the previously mentioned laptop.

P-ISM:
This pen set is probably the most diverse combination of writing utensils known to civilization. Calling them writing tools doesn’t do them justice though. P-ISM includes five different intricately linked devices: a virtual keyboard pen, a miniscule projector unit, a camera scanner, a monetary transferring device, and a cell-phone pen (I believe it writes too, electronically that is). All devices are connected by way of close radius, mobile transmission capability. P-ISM will be web-enabled, if it does ship. Now here’s to hoping they make the clips strong enough.

NEC Design has quite the mobile line-up planned for the next few upcoming years. Whether any of the devices make it through the conception phases or not, many of these items could revolutionize the whole technology industry. NEC has also refrained from mentioning what type of mobile networking it will use to centralized its devices and other broadband sources (i.e. Bluetooth). The projection keyboard that shoots out of that pen certainly has my eyes glued.