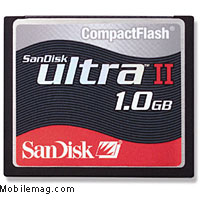 SanDisk Corporation today introduced the SanDisk Ultra(TM) II line of CompactFlash(R) (CF) and SD flash memory cards. Each card features a minimum write speed of 9 megabytes per second (MB/sec.) and a minimum read speed of 10MB/sec., making them the fastest performing flash memory cards in the world. (Results based on testing with the popular HDBENCH benchmark software. Actual results in digital cameras will vary by camera model.) The new card is targeted primarily at the professional digital camera and prosumer market where 4 megapixel or higher resolution digital cameras require significantly faster digital film cards. The announcement was made at the IFA consumer electronics trade show where SanDisk is demonstrating products in Hall 3.2B, Booth 201.

Cor Vos, an internationally-famed photographer and an official photographer at the recent Tour de France bike race, used a new SanDisk Ultra II CF card to shoot the race. “With this new SanDisk Ultra II card,” said Vos, “I was able to take pictures so rapidly that I captured every fast-moving scene that I wanted. Previously when I shot the race, I sometimes missed key pictures because my slower performing flash card was still downloading images from the buffer and I couldn’t use my camera. I see a huge performance difference with these new Ultra II CompactFlash cards, and I think that every professional and serious photographer will want to have them in their equipment bag.”

Yoram Cedar, SanDisk’s senior vice-president of engineering, said, “The SanDisk Ultra II CF and SD card performance has been achieved by using SanDisk’s new high performance controllers with advanced firmware and our high capacity 0.13 micron NAND memory. Over the past several years our system designers and flash memory engineers — working closely together — have gained tremendous understanding of the combined flash card system. This has enabled us to generate a highly optimized overall flash card operation that yields leadership write and read performance while maintaining an exceptionally high level of reliability and compatibility with the large installed base of CF and SD hosts. In addition, our new controllers are based on a cost effective, high performance 32 bit ARC core that enables very high bandwidth data transfer from the host bus to the NAND memory and reduces to a minimum the internal flash card system processing overhead.”

Tanya Chuang, SanDisk retail product marketing manager, said, “We believe there is a significant market demand for the SanDisk Ultra II CF and SD cards because sales of higher resolution and digital SLR cameras are growing significantly. Digital cameras that are four megapixels or higher can typically benefit from faster performing flash memory cards because those cameras have faster image processors. We think that this new SanDisk Ultra II product line will meet the needs of professionals and other serious photographers who require faster performing cards to capture the great pictures they want.”

Chris Chute, senior analyst of digital imaging at International Data Corporation, said, “SanDisk’s strategy with its new Ultra II CompactFlash and SD cards is in line with current trends in the digital imaging market. There are an increasing number of high-performance digital cameras in stores today and these are the cameras that gain the most from cards with fast write speeds and large capacities. Digital photography is the key factor driving the growth of flash memory cards, and SanDisk, with its new SanDisk Ultra II cards, has positioned itself strongly to benefit from this growth.”

Joe DiMaggio, an award-winning international photographer whose work has been published in more than 35 countries, said, “With the introduction of the SanDisk Ultra II CompactFlash cards, SanDisk has raised the bar and has taken the lead in the industry. This will become the standard by which all other flash cards will be judged. The increased speed of the Ultra II cards is going to make many professional and amateur photographers very happy. When I’m using the new 6.3 megapixel Canon 10D digital camera, for example, I need a card this fast to maximize the camera’s performance because it shoots at three frames a second with a continuous burst rate of nine frames a second. The camera and the SanDisk Ultra II card are a perfect marriage.”

The increasing megapixel count of digital cameras can result in extremely large image files which lengthens the time required for the camera to capture the image and save it to the digital film card. SanDisk has designed its new SanDisk Ultra II CF and SD cards so that large image files can be saved in less time and photographers can take additional pictures more quickly. The cards are fully compatible and interchangeable with all CF digital cameras, card readers and adapters.

Chuang added, “Consumers will especially notice the benefits of the faster read speed of the SanDisk Ultra II CF and SD cards. The faster read speed allows photographers to view images more quickly on their camera LCD screens after taking pictures. And they also will be able to upload images to their computer much faster.”