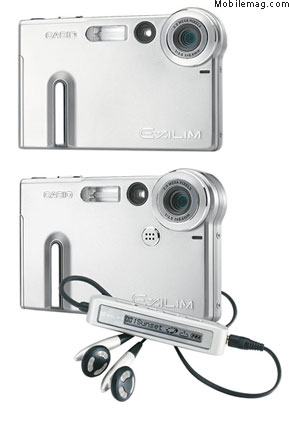 The new EXILIM EX-S20 and EX-M20 models are 10% smaller than their predecessors with no sacrifice to function, and retain a resolution of 2.0 million effective pixels. A number of added features such as the enhanced movie recording facility of up to 60 seconds, extended battery life of 85% over previous models, and the new scratch resistant acrylic panel monitor (LCD), to name but a few, re-emphasize EXILIM as the perfect partner to take anywhere, anytime.

The EXILIM EX-S20 and EX-M20 are a mere 11.3 mm thick, 83mm wide and 53mm high. Their stylish stainless steel cases resist de-colouration and are finished to a high gloss using CASIO’s ‘Ex Fine Blast Treatment’. Furthermore, a new lens protection cover has been added to help protect the lens from impact and dirt.

Both models incorporate a 1.6″ TFT LCD screen with a digital interface, which produces vivid and clear images. Benefiting from CASIO’s original design technology, the cameras also feature a new macro shooting function which allows images to be taken from as little as 30cm away, making the EX-S20 and EX-M20 the first fixed-focus EXILIM models to be equipped with macro capabilities. The ability to record short movies, a major feature of its predecessors, has been improved upon by increasing the length of clips to up to 60 seconds. Due to its built in microphone and speaker, the EX-M20 enables users to capture movies with sound, as well as adding sound clips to individual pictures.

The EX-S20 and EX-M20 also incorporate CASIO’s famous ‘BESTSHOT’ function, enabling users to set-up the camera for pre-defined scenarios. Once a scenarios has been chosen, such as portrait, scenery or night, users can then simply ‘point and shoot’, enabling even novices to capture perfect images every time. Both cameras have an internal memory of 10MB for storing images, this capacity can be increased by inserting a SD or MMC card into the EXILIM’s external memory slot.

Although the thickness of these new models remains the same (11.3mm) as the EX-S2, Stack MCM (Multi-Chip Module) chip mounting has made it possible to reduce the surface area of these models by about 10% over previous models.
High-speed start-up has the camera ready to shoot about 0.9 seconds after power on (when built-in flash is turned off).
A release time lag of only 0.01 seconds (monitor screen and flash off) means that an image starts to be recorded virtually as soon as you press the shutter release button.

– The camera is ready to shoot again only about one second after you record an image (when built-in flash is turned off).

– High-speed playback scrolls at a speed of about 0.1 seconds per image, making image searches quicker and easier.

– The macro mode lets you move in up to 30 centimetres for close-ups, perfect for shots of A4 size documents.

– A lens cover protects the lens from impact and dust by opening and closing whenever the camera is turned on and off.

– A 2 megapixel CCD combines with a new noise reduction process for outstanding image quality, especially when shooting at night.

– The BESTSHOT mode provides access to 15 pre-installed camera setups in an instant. Simply select the sample scene that is similar to the image you want to record, and the camera’s exposure compensation, white balance, and other settings are configured automatically.

– Photo Stand feature lets you view a slideshow of images with the camera on its cradle.

– Full-month calendar screen shows a thumbnail of the first image recorded on each date.

– World Time lets you select one of 162 cities in 32 time zones around the world as your home time. When travelling to another time zone, simply select the applicable city, and time and date settings are adjusted automatically.

– An alarm function sounds an alarm and displays a specified image at a preset time. With the EX-M20, you can also include a voice message for playback at the alarm time.

– Triple Self-timer records three consecutive images, so you can select and keep the best one.

– Images are stored in a Web browser-viewable format that allows you to browse images in an album on your computer screen.

– 10MB of Flash memory comes built in, and a card slot supports use of an SD memory card or MMC (memory card not included).