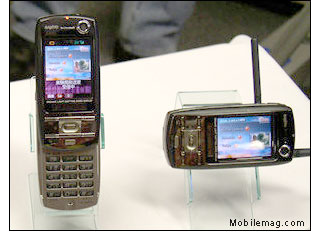 NE Asia reports: Mobile phone handset manufacturers are competing to develop the successors to the camera phone, one of which is a mobile phone that can view TV broadcasts.

As of December this year, Japan plans to roll out terrestrial digital TV broadcasts in the three major metropolitan areas — Tokyo, Osaka and Nagoya. Mobile phone handset manufacturers are expecting that mobile phones with a digital TV receiving function would be the big hit after the camera phone.

After NEC Corp’s demonstration in July, Sanyo Corp introduced on August 8 its prototype mobile phone, which even can record a TV program.

This prototype CDMA2000, 1x-type cell phone has a built-in, one segment terrestrial digital TV broadcast receiving module newly developed for mobile handsets. The feature of the handset is adopting a diversity receiving system that uses multiple antennas for stable reception. The prototype has one antenna mounted on the body, plus it uses an ear-phone cable as a second antenna.