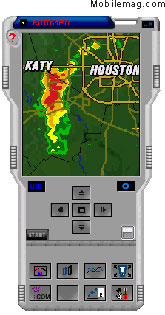 Innoventions, Inc. is now shipping its development system for RotoView(TM), a patented new technology that allows PDA and cell phone users to “tilt” their way around the small display screens found on these devices. With a RotoView-enabled PDA or cell phone, the user overcomes the display navigation challenge by simply changing the orientation at which the device is held.

“We demand that PDA and cell phone manufacturers pack more and more information into those tiny displays. Yet a critical problem remains: Navigating through a large amount of information, whether it’s a map or spreadsheet, is awkward,” said David Y. Feinstein, RotoView’s inventor and President of Innoventions. “The RotoView Development System is a way for OEM manufacturers, product managers and researchers to easily try out the RotoView technology and explore ways to best implement it.”

The RotoView Development System is available now for $195. The system includes a fully assembled board for the RotoView sensor module, a Windows- based software package that allows you to interface the module to your PC and emulate the handheld display, and a flexible USB cable. A RotoView add on module for the Pocket PC will be available soon.

While it is targeted towards engineers and product line managers wishing to quickly evaluate RotoView technology, the RotoView Development System is also perfect for electronics hobbyists, educators and researchers in the field.