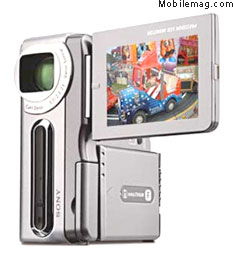 SimplyDV Reports: In keeping with the increasing speculation about the company’s plans for its MICROMV format, Sony Europe has allayed fears that it was pulling back its commitment to the revolutionary digital video that was launched back in 2001 by announcing a new digital camcorder that is the size of a playing card. The MICROMV Handycam DCR-IP1 is claimed by Sony to be small and light enough to fit into a handbag or shirt pocket, yet provides the full range of features that are expected from the company’s range.

The company has yet to make any announcement about the likely fate of other models in its MICROMV range, although there has – for some time – been speculation that the earliest models, the DCR-IP5 and the DCR-IP7 models will soon be dropped along with one or two others in the range.

Describing this new model as being “as stylish as its market”, Sony claims that the slim and light design of the DCR-IP1 makes it the ideal portable camcorder. All the main parts of the camcorder have been slimmed down and streamlined, incorporating a miniature lens, a slim line mechanical deck, a compact and streamlined LCD panel and a single-piece circuit board into the tiny camera body. With portability in mind, it possesses all the features and image quality of the MICROMV camcorder range. Powered by a 1 Mega Pixel CCD for high definition video and optimum colour reproduction, the DCR-IP1 sports a Carl Zeiss Vario-Sonnar Lens with a 10x Variable Optical Zoom as well as a 120x Precision Digital Zoom. It also features an integral automatic lens cover that slides open automatically when the power is on – so no more fumbling for the lens cap.