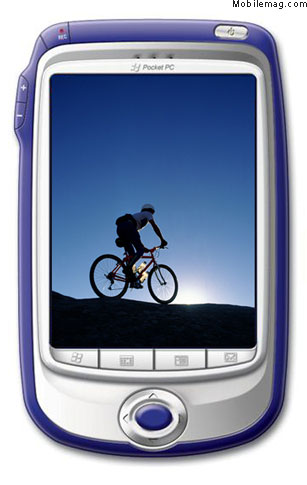 SplashData, Inc., the leading developer of “virtual wallet” applications for mobile devices, announces the launch of SplashPhoto 4.0 for Palm Powered™ handhelds. The new version includes a host of new features and functionality, making it easier than ever to view, manage and share pictures on handhelds.

SplashPhoto, recently named “Best Image Viewer” by the editorial staff of Handheld Computing Magazine, and winner of the Handango Champion Award for “Best Lifestyle Application”, offers a fast, easy-to-use image viewer for handhelds and smartphones. The new version includes a desktop catalog feature with two-way synchronization, offering the easiest means of managing photos on a desktop PC and handheld device. Its one-of-a-kind desktop application now enables users to organize image collections into personalized categories and, upon synchronization, the images are arranged accordingly on the device. There is no limit to the number of personalized categories that users can create.

“SplashPhoto 4.0 for Palm OS is a fantastic way to share a photo collection with friends anywhere you are,” said Larry Berkin, director of developer marketing, for PalmSource. “I use SplashPhoto almost daily to show off the latest photos of my kids on my NX70. The OS 5 compatibility and the image categorization make it easy to get the pictures I want onto my device- fast.”

While other image viewers allow users to install pictures on a device in their original size (many of which are upwards of 1 MB), SplashPhoto enables users to crop images on the desktop, then format and compress them for optimal viewing on the handheld’s screen. As a result, SplashPhoto users are able to store hundreds of images on their devices rather than only having the capacity for storing a few.

“The efficient use of memory is just one of the ways that SplashPhoto is the best choice for anyone wanting to use their handheld as a portable photo album,” said John Chaffee, president of SplashData, Inc. “The new version really shines when used in conjunction with the included desktop software for organizing photo albums and synchronizing with the handheld.”

The new features of SplashPhoto make it easier than ever to share photos with friends and family members. First, all images are stored as JPG files, simplifying the process of sharing pictures with people using other operating systems (such as Pocket PC or Symbian OS). Secondly, images can be transferred via Bluetooth, infrared or e-mail between different types of devices, including handhelds, smartphones, laptops and other devices.
Significant enhancements to SplashPhoto include:

• a desktop catalog for easily managing photo albums and synchronizing them with the handheld; 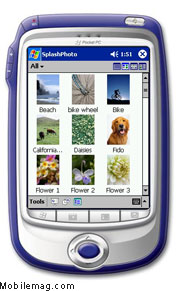 • optimization for Palm OS 5 devices and the ARM processors that drive them, resulting in instantaneous image display;

• an option for users of Palm Powered devices not equipped with expansion memory slots (like the Handspring Treo 270 and 300) to store JPG images in the internal memory of their handhelds;

• support for built-in cameras such as the Palm Zire71 and Sony Clie NX series;

• support for the Palm Photos file format, the photo viewer that ships with the Palm Zire 71 and Tungsten C models, enabling users of these devices to view Palm Photos images in SplashPhoto;

• a new “Pan and Zoom” feature, enabling users who have installed large, high-resolution JPG images on their devices to zoom in and out or pan across the picture to improve on-screen viewing;