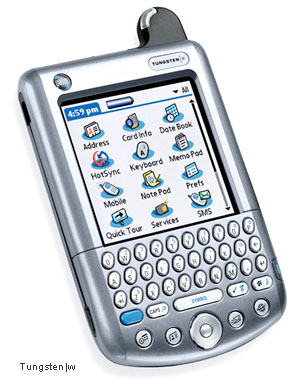 A few weeks ago, I received the Tungsten W from the kind folks at Palm. I LOVE the idea of a single device to cover my mobile computing and communication needs so I just had to see what Palm had to offer. In order to get a fair appraisal of what the unit had going for it, I decided to go hardcore and leave both my current PDA and Motorola V60 cell phone behind and LIVE off the Tungsten W. I synched my Outlook data with usual Palm ease and was good to go in minutes. Since the Palm side is really nothing new, let’s concentrate on the phone functionality.

Day 1: The mobile phone integration with the existing Palm applications are simple, dialing any number in your address book is a breeze. Every time the phone rings I actually have to unwind the hands free headset I have curled around the unit and jam the bud in my ear. Would you mind telling me how any engineer in his right mind actually thought a cell phone that you can’t actually hold to your head was a good idea??? I can’t stress enough on what a pain in the cheeks this was. You also look like quite the nob in the process. Hey sure, you knew this up front so why are ya complaining? Well, I thought I could live with it. The truth is, I use my phone a lot and I just can’t. Frankly, Handspring definitely did phone integration way better in the Treo 270.

Day 2: I decided to see how long the juice would last so I let it run flat before putting it to charge for the night. With my stopwatch in hand, I turned the unit on in the morning and decided to make my first call. Problem is…the radio wouldn’t come on. Any attempt to turn on the phone portion just returned you to the same menu, sans changes. After about an hour of soft, hard and awkward resets and SIM card removals, I break down and call Palm’s PR guys. They use Environics over here and they are amicable professionals on even the worst of days. They sent me out another unit post haste and also included a front cover with a built in speaker and mike so I can address the Day 1 issues.

Day 3: New Tungsten W arrives – D.O.A. I pop it in the charger and head to bed. The next morning, stopwatch in hand, I pick it up and hit the on button…………….nothing. On the high side of disappointed, I call the PR guys again. This time we figured we’d save some shipping bucks and send the Tungsten C at the same time.

Day 4: Both Tungstens arrive….all A-OK. I put the Tungsten C on charge and head out with the Tungsten W. Using the adapter front cover I noted earier, I was able to answer the phone just by pressing the answer key on the cover and holding it up to my ear. But sadly, no nirvana here either. No matter who calls me, they get to enjoy a slight but noticeable echo in my responses. Noticeable enough that it is mentioned by everyone I speak to. Also, the unit is just too wide to be a cell phone. It feels awkward and there’s just no positives on that front. Yes SMS messaging on a thumboard rules and I had a great time with it. It still wasn’t nearly enough to make up for the rest of the problems. On the upside, using the smaller processor has it’s battery advantages. I put it through three solid days of calls, SMS, surfing and software installation before it needed a charge.

On the software side, as noted, it’s nothing to rave about either. Not having the benefit of either the OS5, decent built in memory or faster processors, it’s all you would expect from the last generation. Aside from still supporting web clipping apps, it’s an excellent organizer and little more. I decide to head back home and chuck the Tungsten W back in its box (literally).

So, a wee bit unhappy with my first Tungsten experience I turn to the freshly charged Tungsten C. Man-o-man it’s hard to believe these products are even related. Aside from the physical resemblance, these two are about as different from one another as golf cart and a sport bike.

Day 1: I grab the Tungsten C, my trusty cell phone and head into town. A good friend of mine recently bought a Dell Axim X5 and a wi-fi card. Despite all the promises of Pocket PC (Pre PPC 2003 / Windows Mobile), he just can’t seem to log into certain networks. In an attempt to see if the same holds true for the C, I trolled around town and found all the usual suspects. I have to mention just how impressed I was. Not only did it log into every open network without a flaw, it did it in under 4 seconds most of the time. The built in browser had no trouble with SSL security, animated gif’s, frames and rendered them with admirable speed. The built in utility for setting up networks was simply designed and intuitive. In about 3 hours of surfing I had two freezes (both related to the networks I was connecting to) which I easily cleared with a soft reset. Some other issues with the browser were the lack of a zoom in/out feature and no ability to open multiple windows. Hopefully we’re only minutes away from a piece of 3rd party software that addresses that.

Day 2: Really noticing the 400 MHz processor speed in some of the classic Palm apps. My biggest complaint about the Notepad software in the last Palm series was it’s inability to keep up with my pen movements. I couldn’t just scrawl a note because parts of the letters would always end up missing. This puppy kept pace the entire time. Even allowing me to do a super quick signature without skipping a pixel. Yes, as many of you have heard, the screen quality is excellent. Lined up against the Axim I would choose the Tungsten C hands down. Of course, the additional speed brings the promise of video and I used the included Kinoma player software to run few video’s from their site. The quality was less than that of the Ipaq but still very viewable.

Day 3: Loaded on some MP3’s onto an SD card and headed off to the park. You’ll notice that the Palm advertising doesn’t really push it as an MP3 player. It does fine with the headset but that mono speaker leaves a lot to be desired. The install CD comes with a trial version of Pocket Tunes for Mp3 play and I downloaded the latest Palm Real Player. I was able to play music but did not have, unlike my Nexio review, any ability to listen to streaming radio. Also of note is the solid feel of the included stylus.

Day 4: I used the synch software to move a huge number of pictures onto the handheld. They were compressed during the transfer process to take up as little space as possible and still look great. Anyone that comes within 4 feet of me has been bored to tears with my son’s latest adventures. The software actually drops a new folder into the My Pictures folder on my laptop so it’s just drag and drop. I would have liked to see even a basic camera in this unit but I guess I will just wait to see what SD cameras are supported.

I’m really happy with the Tungsten C. I am logging onto networks everywhere that I go and enjoying the benefits of a Turbo charged Palm Processor. The benefit of this is that I can use most of the cool new software that takes advantage of the Tungsten C’s processing power while still having access to the virtually limitless supply of older Palm freeware & shareware. At 51MB of useable storage, and another 64Mb in SD expansion memory, that’s a helluva lot of 50KB Palm apps. I didn’t plan on switching back to Palm but the Tungsten C is definitely a unit I don’t want to part with. 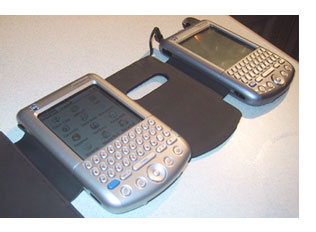 (Please note that the rating of 96% is for the winner of the showdown, the Palm Tungsten C)