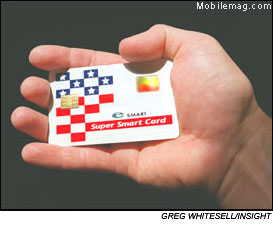 e-Smart Technologies, Inc., and its affiliate, Homeland Defense, Inc., jointly announced the availability of a new version of its Super Smart Card(TM) that allows privacy protected biometric fingerprint identity verification to take place on a standard sized smartcard that operates with numerous ISO compatible smartcard readers. In addition to sure identity verification, the Super Smart Card’s(TM) multi-application architecture and operating system can protect ones credentials in the same fraud-proof card that can hold and protect ones security access cards, ones credit/debit cards, and all other cards — all biometrically protected and absolutely secure.

Mr. Tamio Saito, e-Smart’s C.T.O. stated “With the ever increasing terrorist threat and the concurrent explosive rise in the crime of identity theft there is now the critical need to know that someone is exactly who they say they are. With this in mind, we at e-Smart and Homeland Defense are proud to have created what we believe to be the first commercially viable system that will allow the US Government and private industry to protect our people from identity crimes that lead to terrorist acts and financial catastrophe.” Mr. Saito immediately added, “Of equal importance, our system provides this identity assurance but does not in any way abridge a citizen’s right to privacy or reveal his or her personal information – quite the opposite, our system protects both privacy and personal information.”

Mr. Saito is the inventor of the original patented “Biometric ID System, using Smart Cards” among many other revolutionary inventions.

e-Smart and Homeland Defense offer complete, integrated security systems centered around the Super Smart Card(TM) subsystem. These fully redundant, scalable and robust systems, available now, are equally capable of protecting a single vulnerable building or site, to ports and airports to the entire country and all of its borders.

The Companies recently announced that they will install and showcase their technologies at the Port of Beaumont, Texas; a strategic port in the highly vulnerable belt of Texas petrochemical ports.

Commenting on this breakthrough in micro-technology, Mary Grace, President and CEO of both Companies said, “Since its introduction, our Super Smart Card(TM) has always been ahead of the competition. With the introduction of this newest iteration, we leap forward once again.” Ms. Grace then added, “With Homeland Defense, Inc., and e-Smart Technologies, Inc., tight budgets are no longer an excuse to delay implementation of much needed systems necessary to protect our homeland – especially in light of the ever escalating security threats emanating from the enemies of our freedom. We at Homeland Defense and e-Smart stand ready to implement what we believe to be the best possible system to protect our homeland available today, the Biometric Verification-Homeland Defense System(TM) (BV-HDS(TM)) featuring the Super Smart Card(TM) and we have offered it to the U.S. Government on financial terms that are as innovative as our technologies.”